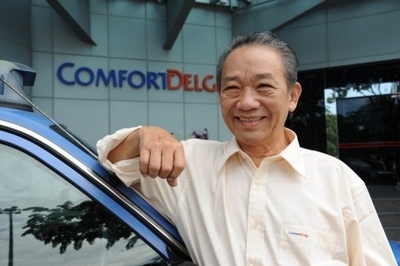 A Singaporean taxi driver has been heralded as a hero after he returned Sg$1.1 million ($900,000) in cash to a vacationing Thai couple who left the money in his cab.

Sia Ka Tian, 70, was shocked to find the money in a black paper bag on the back seat on Monday after he dropped the couple off at a shopping center.

"When I saw the money, I thought, trouble is here. I was sure there was at least $200,000 in the bag," the Straits Times quoted the 31-year veteran in the taxi business as saying.

But when he brought the money to transport company ComfortDelGro's lost-and-found office, his stunned colleagues counted Sg$1.1 million in thousand-dollar bills.

"The money is unimportant to me. It doesn't belong to me, so how can I use it?" he told the newspaper.

The Thai couple reported the loss to the transport company and Sia was waiting for them when they arrived to claim the money.

The report did not say what the couple were doing with that large sum.

The driver received an undisclosed cash reward from the grateful couple, whose names have been withheld, and the company also plans to give him an award for good service.

"Finding one million dollars in cash is not an everyday affair and in fact, we wonder how many people would have possibly been tempted" to pocket it, company spokeswoman Tammy Tan told Agence France Presse.

"We are immensely proud of him and are glad that the passengers recovered their money.'

It was the second most valuable item returned by a cabbie working for the company. In 2009, another taxi driver returned fives kilos (11 pounds) of gold bars worth Sg$377,000.