U.N. Wants to Use Drones in DR Congo Conflict 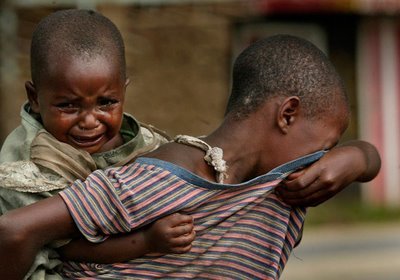 The United Nations wants to use drones for the first time to monitor fighting in the eastern Democratic Republic of Congo, where Rwanda has been accused of aiding rebels, officials said Friday.

Peacekeeping chiefs have been in contact with the governments of DR Congo and of Rwanda about the sensitive move, which could set a precedent that would worry other United Nations members, diplomats said.

U.N. leaders are looking for ways to strengthen their peacekeeping mission in DR Congo, MONUSCO, where guerrillas from the M23 rebel movement have taken over much of mineral-rich North Kivu province.

U.N. experts say Rwanda and Uganda have sent troops and arms across the border. Both strongly deny the allegations.

The U.N. "is considering a range of ways to strengthen the capabilities of MONUSCO to protect civilians from the threat of armed groups in the vast area of eastern DR Congo," U.N. peacekeeping spokesman Kieran Dwyer told AFP.

"Unarmed aerial vehicles, drones for monitoring the movements of armed groups, are one tool we are considering," he said.

"Of course, we would do this carefully, in full cooperation with the government of the DR Congo, and trialing their most effective uses for information gathering to help implement our mandate to protect civilians."

"Ultimately, to introduce these, we would need the support of member states to equip the mission," Dwyer said.

While the drones would not halt the current M23 advance, the U.N. is also considering bringing in extra troops and redeploying its current force. U.N. leader Ban Ki-moon is to recommend options to the U.N. Security Council soon.

MONUSCO currently has about 17,500 troops but could go up to about 19,500 under its Security Council mandate.

"The U.N. has approached a number of countries, including the United States and France, about providing drones which could clearly play a valuable role monitoring the frontier," said one U.N. diplomat, speaking on condition of anonymity.

"Clearly there will be political considerations though," the diplomat added.

"This is controversial, not all countries agree with this," said Olivier Nduhungirehe, first counselor for Rwanda's U.N. mission.