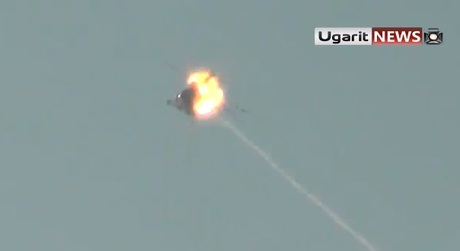 Syrian rebels downed an army helicopter for the first time on Tuesday with a ground-to-air missile from newly acquired stocks, a watchdog said, in a potential turning point for the 20-month conflict.

A car bomb hit a regime security post near Damascus and clashes raged around the capital, as rebels further tightened the noose around the key northern city of Aleppo.

"It is the first time that the rebels have shot down a helicopter with a surface-to-air missile," Syrian Observatory for Human Rights director Rami Abdel Rahman said of the gunship that was on a strafing run near a besieged northwest base.

The Sheikh Suleiman base, 25 kilometers (15 miles) west of Aleppo, is the last garrison in government hands between Syria's second city and the Turkish border.

An amateur video uploaded to YouTube showed a helicopter plunging to the ground in a ball of flames.

The Observatory said the missile was part of a consignment newly received by the rebels that had the potential to change the balance of military power in the conflict which began as a peaceful uprising in March last year.

Near Damascus, a car bomb killed at least two soldiers at a military police checkpoint in Jdeidet Artuz as the regime pursued its efforts against insurgent strongholds south of the capital.

Battles raged in Moadamiyet al-Sham and nearby Daraya, where a massacre in August killed more than 500 people, according to the Observatory.

Rebels meanwhile seized a military post 15 kilometers southeast of Aleppo, tightening the noose around the city, both the insurgents and the Observatory said.

After hours of fighting, the rebels in the area said they had taken the post at dawn in the village of al-Mintar, near al-Safireh.

The operation was carried out by the Islamist group Ahrar al-Sham which fights alongside the Free Syrian Army, the main component of the armed opposition to President Bashar Assad's regime, they said.

Seventy soldiers were killed or captured, and the rebels seized six 23-mm cannons, rocket batteries, and other weapons and ammunition, they added.

It came a day after insurgents took control of a dam in an area that connects Aleppo and Raqa provinces, leaving the regime with only the highway from Damascus to send reinforcements, according to Abdel Rahman.

Elsewhere, in Idlib province in the northwest, an aerial bombardment near an olive press killed at least five people and wounded dozens, the Observatory said.

In the same province, rebel-held Maaret al-Numan was also bombed from the air as clashes raged at the southern entrance of the town strategically located on the Damascus-Aleppo road.

Human Rights Watch called on the army to stop using cluster bombs after at least 11 children were killed by an air strike south of Damascus on Sunday.

According to two witnesses cited by HRW, the air strike occurred as a group of around 20 children were gathered in a field where they usually play.

The Syrian regime insists it is fighting against foreign-backed "terrorists," and state media published the names of 142 fighters from 18 countries who it said were killed alongside rebels.

Pro-regime Al-Watan published a list, which it said Damascus sent to the U.N. Security Council last month, that included Arab, North African, Central and South Asian fighters, giving the date and place of their death.

"Most are jihadists who belong to al-Qaida's network, or who joined it after arriving in Syria," the paper said, adding they entered Syria via Turkey and Lebanon.

An initial toll from the Observatory, which relies on a network of activists and medics for its information, said 87 people were killed across Syria on Tuesday, including 32 civilians.

The watchdog has recorded a total of more than 40,000 deaths in the Syrian conflict.

first refers to the use of ground to air missile!

Hey where is Aoun today??? I wanted to tell him he was right. The war will be over on Tuesday, but his boy is not the winner.

Hey killer_instinct watch yourself dude you might have a hernia .

Hey killer.....It is easy to manipulate ignorant, unhappy, dispossessed, and resentful people. It's like throwing a bone to a starving and excitable dog. You cannot blame the dog in such a situation, but the cynical villain who throws him a bone to gain his attention.

Sounds to me you are talking about the people in your neighborhood in Dahye. Why don't you write into Manar like you do here? Oh wait they don't allow dialog and dissent.

gabby9 - You are just another Disgraced, Inbreed, Self Centred, Atheist Masonic Pig Who be burning in Hell's Fire Along Side Your Corrupt Wahabi/Israeli Devils, even your repentance will not be accepted by god because you have already sold your soul to Asmodeus, the one who prays on gullible weak unfaithful humans like yourself. You cannot run forever as for HEZBOLLAH,SYRIA,IRAN They will fight to the bone and last breath, Death Before Dishonour :)

Here is a link to watch the helicopter get shot down and the beginning of the end for the Hezz and ASSad in this war. It is a beautiful rocket strike. Nassy always proclaims his rockets as great. I like this one because it is the sign of another war loss for the Hezz. Watch how beautiful it is. http://www.nowlebanon.com/NewsArticleDetails.aspx?ID=461146

beautiful but not much damage was done? wierd

awww... when a puppy is cornered he shows his teeth... it's ok little puppy... we will be extra gentle on you ;)

Allah yzeed il new stock.. cant wait till rockets start landing in on the presidential palace... i only feel sorry for Mrs. Assad.. i will gladly offer her asylum!!! hahaha

actually, she is in Dubai and already has a pseudo asylum. I guess she doesn't have the same restrictions on ordering her clothes there.

the funniest thing is the 'law kuntu a3lam' nasrala who claims to know everything from economics, to politics to history. He told his followers that bashar will survive and ma fe chi...'khlisit' lol etc.. then he send the she3a young men to die on 'jihadi duties' not in galilee like he has been barking for years but in Qusair 7ums!!! nasrala will bring to the she3as what hitler brought to the germans, both were lunatics and both were hiding in bunkers.

realist the funny thing is they blame the Sunnis for wanting an Islamic state while their idol and the pinnacle of good governance for them is in Iran.. which.. surprise surprise is an Islamic govt... hahaha.. they are full of nothing but hot air and hypocrisy.. not to mention an apparent hatred for Sunnis that is unreal.

M8 will say the day that bashar s regime will fall that he has achieved a divine victory as they are always in denial as long as it does not fit their propaganda....