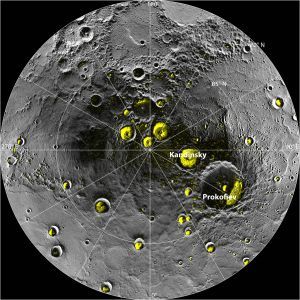 "The new data indicate the water ice in Mercury's polar regions, if spread over an area the size of Washington DC, would be more than two miles (3.2 kilometers) thick," said David Lawrence, a researcher participating with NASA's mission to study Mercury.

Though much of Mercury is boiling hot, its axis of rotation is nearly parallel to the Sun -- which means the poles of the planet are never hit by the Sun's heating rays.

Scientists have long hypothesized these shadowy poles could harbor frozen water and other interesting materials.

In 1991, that theory got a boost when a powerful telescope in Puerto Rico detected "radar-bright patches" at the poles, often in spots where a previous mission in the 1970s had found large impact craters.

For the first time, new data from the MESSENGER spacecraft, which landed on Mercury in 2011, allows for a detailed model of just what's going on at Mercury's mysterious poles.

Images from MESSENGER confirmed that the radar-bright patches are all within cooler, shadowed regions, consistent with the theory they could be ice spots.

The spacecraft's neutron spectrometer also analyzed hydrogen concentrations as a way of determining the presence of water, which is a molecule composed of hydrogen and oxygen.

In the coldest spots, the water was on the surface, but in slightly warmer regions, where the ice might have melted, it was covered by a dark material with a lower concentration of hydrogen.

The researchers said this dark material could actually be the key to explaining how the water got there in the first place.

The dark material, which serves as insulation, is likely a mix of complex organic compounds, which were "delivered to Mercury by the impacts of comets and volatile-rich asteroids," explained David Paige, another researcher involved in the project.

Those comets and asteroids, he added, were "the same objects that likely delivered water to the innermost planet."

"For more than 20 years the jury has been deliberating on whether the planet closest to the Sun hosts abundant water ice in its permanently shadowed polar regions," said Sean Solomon of Columbia University's Lamont-Doherty Earth Observatory.

"But the new observations have also raised new questions," he added. "Do the dark materials in the polar deposits consist mostly of organic compounds? What kind of chemical reactions has that material experienced?

"Are there any regions on or within Mercury that might have both liquid water and organic compounds? Only with the continued exploration of Mercury can we hope to make progress on these new questions," he said.

Three papers describing the MESSENGER findings were published Thursday in the online edition of Science Express.