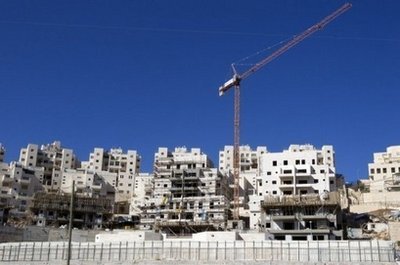 Israel's decision to build new homes between east Jerusalem and Maaleh Adumim settlement is controversial plan which, if enacted, would cut the West Bank in half and threaten the viability of a future Palestinian state.

The decision, which was taken last week by Israeli Prime Minister Benjamin Netanyahu, relates to construction in a corridor of land in the West Bank which runs between the easternmost edge of annexed east Jerusalem and Maaleh Adumim -- which is known as East 1, or E1 for short.

Israeli plans for construction in E1 have been on the cards since the early 1990s, but have never been implemented due to heavy pressure, largely from the United States, the Peace Now settlement watchdog says.

Those behind the plan sought "territorial continuity" between Maaleh Adumim, which is home to some 36,100 Israelis, and the settlement neighborhoods that ring Arab east Jerusalem, which was captured by Israel during the 1967 Six Day War and later annexed.

Part of the proposed site, which covers some 12 square kilometers (4.6 square miles), is privately-owned by Palestinians and part was declared by Israel to be "state land" during the 1980s.

The original draft for the project included plans for nearly 4,000 homes, hotels, an industrial zone and a reservoir. A police headquarters has already been built there.

In September 2005, the scheme was put on hold under pressure from then U.S. president George. W. Bush, in a move denounced Netanyahu who was Israel's finance minister at the time.

The agreement was not included in the official coalition deal between the two parties, in order to avoid angering Washington, Israel's army radio said at the time.

It remained on ice until last week's historic vote by the U.N. General Assembly to upgrade Palestine's status to that of a non-member observer state, after which Israel said it would 3,000 homes in the West Bank and Jerusalem -- some of them in E1.

The government has not given details or a timeframe for the new construction which has provoked an international outcry.

"Should the E1 settlement be constructed, it would represent an almost fatal blow to remaining chances of securing a two-state solution," U.N. leader Ban Ki-moon warned on Sunday, saying it "risks completely cutting off east Jerusalem from the rest of the West Bank."

"Were E1 to be implemented, its impact would be devastating. It would drive a wedge into the West Bank," said Daniel Seidemann director of the NGO Terrestrial Jerusalem.

"The two state solution would be literally impossible."

On Monday, Israel's ambassadors in London, Paris, Stockholm and Copenhagen were summoned for consultations with the foreign ministries in their host countries over the plans, amid unconfirmed reports that several governments were even planning to recall their own envoys from Israel in protest.