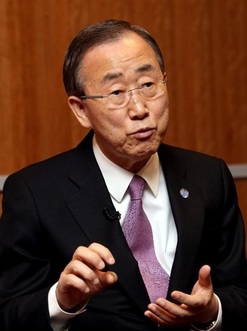 U.N. chief Ban Ki-moon said on Thursday that Syrian President Bashar Assad should be "brought to justice" if his regime uses chemical weapons to combat the armed revolt in his country.

"I have expressed my concerns to the Syrian government and I have sent a letter to President Assad two days ago," Ban told a joint news conference with Iraqi Prime Minister Nouri al-Maliki in Baghdad.

"In any case, if chemical weapons are used, then whoever it may be will have to be brought to justice," the U.N. secretary general said. "It will create serious consequences on the people."

The Syrian government, fighting to prevent the capital Damascus from falling to rebel forces, has insisted it would never resort to chemical weapons.

But Washington fears that battlefield advances by rebels could prompt Assad to use chemical arms, or that such stocks could become insecure or find their way into the hands of groups hostile to the United States and its allies.

In a new warning as the conflict approaches the 21-month mark with more than 41,000 people killed, U.S. President Barack Obama on Monday warned Assad of "consequences" if he uses chemical weapons against his own people.