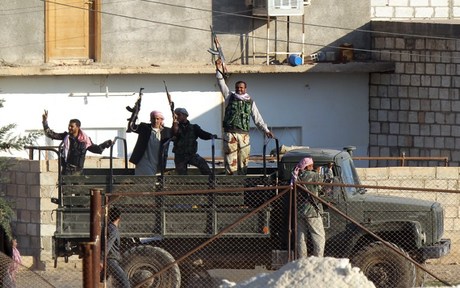 In an army barracks seized by rebels in northern Syria, Abu Islam heads a new unit that looks into complaints against insurgents for abuses such as intimidation, extortion and vandalism.

"We need an organized system that works better than before, to eliminate bad behavior by (rebel) Free Syrian Army fighters and civilians," Abu Islam told an AFP correspondent in al-Bab.

Civilians in the rebel-held town are encouraged to seek protection from some 80 volunteers of the Committee for the Promotion of Virtue and the Vice Prevention.

The mission of the internal affairs unit is to put a stop to crimes committed by FSA fighters, most of which have involved theft and vandalism.

It has been controlled by rebels since mid-July, though their internal affairs unit was only established in November, with Abu Islam saying it is one of the first of its kind in Syria.

"It was set up following consultations with all the brigades in al-Bab," he added, a Kalashnikov assault rifle in hand and face covered.

Though no salaries are provided, those who enlist receive masks, camouflage clothing and Kalashnikovs.

While on mission, volunteers always wear masks, concealing their identities, for fear of retaliation by angry rebels, said Abu Islam.

Attacks on the revolutionary policemen by friends or family members of detained offenders are not uncommon, he added.

Abu Islam and his colleagues were all recruited from outside the ranks of the FSA.

"These are young people who served out of their own choice, all from al-Bab or the countryside," Abu Islam said, speaking to AFP from behind his desk, in a building heavily guarded by armed men constantly on the look-out.

"No members of the new institution has ever been part of the FSA," said Thaer al-Horr, who used to sell mobile phones before the Syrian conflict broke out, but has now joined the new squad.

"I joined the al-Bab internal affairs unit because I saw many civilian members of the FSA making mistakes in this town," said Horr. "We should set up a system in this town in order to improve people's lives."

Abu Islam explained the decision to exclude fighters from the squad was taken to avoid brigades accusing the squad of making arrests on behalf of competing rebel groups.

"They are not military," he said. "They aren't military in order to avoid people accusing us of using any brigade backing."

The squad works alongside the rebels' Islamic court in al-Bab, set up soon after the town was seized from the army, Abu Islam added.

If enough incriminating evidence is brought against a defendant, he is given 48 hours to report to the rebel authorities, said Abu Islam.

And if the defendant does not report in time, the rebel internal affairs squad deploys to bring him in.

The accused is then interrogated and imprisoned, until he is brought to trial.

Human rights watchdogs have frequently accused anti-regime rebels of serious abuses, including kidnapping, torture and extra-judicial assassination, albeit to a smaller degree than those committed by forces loyal to President Bashar Assad.