Assad not Seeking Asylum in Ecuador 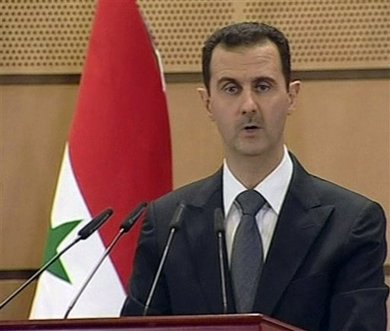 Ecuador said Thursday it has not offered Bashar Assad asylum amid speculation the embattled Syrian president was weighing Latin America as a place of refuge.

The asylum speculation stems from a recent trip to Cuba by Syria's deputy foreign minister, Fayssal Mekdad, who delivered a message from Assad to Cuban President Raul Castro, according to the official Cuban news agency Prensa Latina.

The Syrian official also was reported to have traveled to Venezuela, Nicaragua and Ecuador, whose leftist governments have close relations with Havana.

Asked about the reports, State Department spokesman Mark Toner said Wednesday that the United States was aware that some countries had offered to host Assad and his family should he leave Syria.

Assad has so far rebuffed international pressure to step down, but fighting has intensified around Damascus amid a brutal civil war that human rights monitors estimate has claimed at least 42,000 lives.

I wonder how much longer a rope would stretch his neck. I guess we are about to find out in the near future.

what a great pic...im sure that look is now plastered on his face...

Assad does have a nice neck for strangling.

I'm sure that the giraffe will end up finding a zoo somewhere...

Dear President Assad:
In times like these, I recommend 2 songs:
1) the final countdown, which we grew up, in the 80s, listenning to it, while your dad, and uncle Rifa'at were bombing the hell out of us, in eastern beyru (syrians do not pronouce the last consonant, mou?);
2) the end, by jim morrison and the doors (is dedicated by hassoun: "this is the end, my only friend, the end...").
Also, hassoun likes to go with you wherever that is, including hell (I will consider this as my Christmas gift)...We miss you already...

Every day Bashar looks more and more like Sylvester the cat, I tawt I taw a puddy tat!