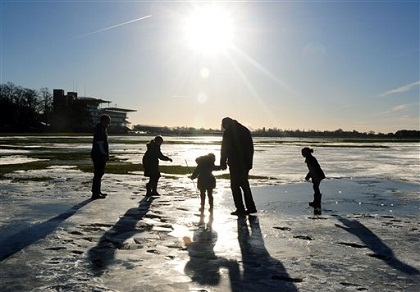 Freezing temperatures and heavy snowfall in the Balkans, that seriously affected traffic throughout the region, claimed a second victim on Sunday as a man died from cold in northern Serbia.

The victim was found dead near his home in the village of Ravni Topolovac in northeastern Serbia, emergency services said.

The first victim was a 60-year-old man who froze to death in his home in the northern town of Novi Sad on Saturday.

Snow, accompanied by strong wind paralyzed northern Serbia and provoked chaos in road traffic, while the army and police were helping emergency services.

"More than 660 people, including 30 children, who were trapped in their vehicles due to snow, were rescued on Serbia's roads," head of the national emergency services department Predrag Maric said.

The highway towards Hungary was blocked for several hours while vehicles were stuck in an 11-kilometer (seven-mile) queue, he added.

A woman gave birth in a truck as she could not reach a hospital in the northern town of Zrenjanin and named the baby girl Snezana (Snow White), Beta news agency reported.

In neighboring Montenegro several villages in the northern part of the country were cut off and without electricity. The snow was up to 70 centimeters (27 inches) high in this mountainous region.

Croatia which was practically paralyzed on Saturday due to heavy snow traffic was gradually returning to normal on Sunday. In the capital Zagreb the airport was closed for about nine hours.

However, Croatia's Adriatic coast was hit by strong northerly winds gusting up to 155 kilometers (95 miles) per hour, with many ferry and catamaran lines to the islands either delayed or canceled.

Snow was also falling in Bosnia, Macedonia and Kosovo but no major problems were reported from there.