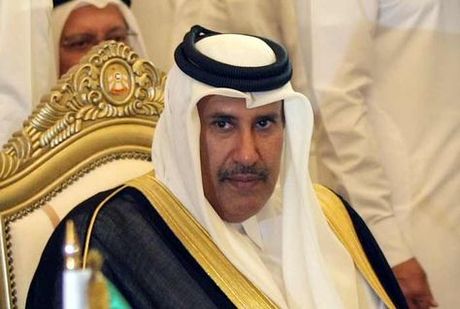 Qatar called Sunday at an Arab League ministerial meeting for a rethink of an Arab offer of normal ties with Israel in return for its pullout from occupied land and branded the international Quartet a failure.

"It is logical after 10 years to objectively reconsider the peace process, including the Arab initiative," said Sheikh Hamad bin Jassem Al-Thani, the country's prime minister.

He called for a "thorough look into developments in the region and the world, and to decide carefully on our future steps and roadmap."

Sheikh Hamad, who heads an Arab League follow-up committee, said the initiative tabled in 2002 by Saudi Arabia and endorsed by the Arab League "will not be on offer for ever."

The League has proposed a normalization with the Jewish state in return for its pullout from occupied lands, notably the Palestinian territories.

Palestinian President Mahmoud Abbas, for his part, told the meeting in Doha that he was opposed to a withdrawal of the offer, warning that it could lead to regional conflict.

"It is not permissible to talk about sidelining the Arab peace initiative. It should stay," he said. "It is a very important initiative, and I hope that we would not every time talk about shelving it, because that would mean war.

"Are we ready for war? Personally, I say I am not," he added.

The Qatari premier also criticized the diplomatic Quartet for Middle East peace comprising Washington, Moscow, Brussels and the U.N. which he said had "proven to be a failure and unable to make any achievements."

He called for a "reevaluation of its performance."

Unfortunately, as you know, demographically speaking, things have changed on the ground since 1967, and this has to be taken into account, especially as Abu Mazen has stated on more than one occasion that there will be no Jews living in the State of Palestine.
Israel has offered land for land, and also remember that Arafat was offered 97% of the land at Camp David and he refused.
Also note that just yesterday Khaled Mashaal proclaimed in Gaza that Hamas will not recognise Israels' right to exist and he see the Palestine state as from the Sea (Mediterranean) to the River (Jordan).
How will the State of Palestine, of which Gaza is a part, overcome this obstacle?

Most of the settlements in the WB would need to be dismantled. This will never be easy as Israel is a democracy and a decision like this would need to go through the Knesset. But if the Israeli public is convinced that this is necessary for long-term peace, then there is a chance that a decision like this could go through.
As for Hamas and Mashaal, they can be pressured one way or the other by the Arab states into accepting this settlement.
Remember that Syria, the country that has done the most to torpedo every peace initiative, is on the bring of collapse and is critically weakened right now. So Hamas has only Iran to lean on for support. The conditions are perfect for bold initiatives.
Also note that Arabs no longer pose existential threats to Israel. Iran does. Arabs and Israelis face a common threat, so it is in the interest of both people to make peace and cooperate.

Syria torpedoed every initiative for peace? Do you recall Yitzak Rabin and his deal with Walid Mouallem that almost went through before Rabin's assassination? The deal was permanent peace after Israel's withdrawal from the Golan heights.

It was the right-wing Israelis that assassinated Rabin and the peace deal with Syria; not the Syrians. The same right-wing members that are in power now. Natenyahu, Peres. Let's not forget that Peres was with Rabin when Rabin was assassinated, and miraculously Peres survived.

It is not fair to put all the blame on Syria, as the right-wing Israelis do not want peace either. They are content this way.

If you want peace, the government in Israel must change first.

Your facts are slightly wrong. Shimon Peres is now the President of Israel, and does not interfere in politics. He was previously the leader of the left wing Labour Party, so I don't see where you get the idea of him being a right-winger in power.
As peace is usually (!!) between countries, why did Syrian FM Mouallem not offer to continue the negotiations after the assassination of Rabin?

My facts are spot on, actually. I don't know what history book you are reading.

There was absolutely no point for Walid Moallem and Faruk Shara to continue the peace process because the government who took over after Rabin's death refused to give back the Golan Heights. Much like the government of Israel today. Sound familiar? Yhitzak Rabin was one of the only people who wanted to return the Golan Heights for peace, and thus was assassinated.

Not to mention most of the dealings were going on behind closed doors and under the table. Not only until modern times that these closed door under the table meetings were discovered by testimonies by the people themselves. Well, except the ones who were killed.

I would like to add that Shimon Peres is one of the dirtiest politicians out there. He is quite clever. He is also one of the people who encourages Israel's nuclear ambiguity policy and locked up Venunu.

And when I said Peres was with Rabin when he was assassinated, I meant they were standing next to each other, not that they were team-mates.

Good job Phillipo! Besides, the 1967 borders are not defensible; i.e. every day you'll have armed thugs (hassoun, egyptians, syrians, iraqis, libyans, tunisians, algerians,even folks from pakistan; I mean anyone who is having a bad day, or constipation, in the name of religion...) will try to penetrate and hailing "ALLAH IS GREATER..." for more brothers in arms, either to fire an rpg, or blow him or herself up...As Phillipo said, torch will accept nothing less than from the river to the sea; therefore, good luck with peace => Sadly, Lebanon will continue to pay this price, in perpetuity...

I'm sure that you would find that if the Israelis could read this exchange of ideas, you would find that 90% of the "man in the street" would agree.
It is just a pity that the emir of Qatar when he visited the Gaza Strip didn't think to stop also in Israel. I think that it would have shown how intense his actions towards ME peace are.

Isn't it interesting that when one mentions the restart of peace talks between the Palestinian Authority (or State of Palestine - whatever you want to call it) and Israel, and suggesting that the Emir of Qatar should also have gone to Israel to attempt to push forward the Arab peace initiative, there are people who vote here against it.
These are the people who no matter what happens do not want peace between Israel and Palestine, and on the wider field peace between Israel and the Arab World.
Truedemocracy stated that "If you want peace, the government in Israel must change first." On the same level so must the government in Palestine, and more specifically in Gaza.