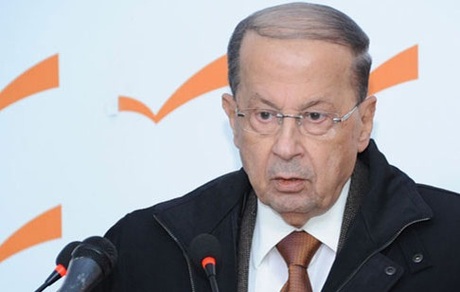 Free Patriotic Movement leader MP Michel Aoun on Sunday called on the Lebanese parties to distance themselves from the Syrian conflict, amid deadly Syria-linked clashes in the northern city of Tripoli.

“We must distance ourselves from the conflict in Syria and we don't wish to see it ruled by takfirist groups,” said Aoun during a meeting with a group of dentists who won the elections of the Lebanese Dental Association earlier in the day.

“The Arab Spring is not a spring because of the chaos that happened and this 'creative chaos' is what the Americans had promised us,” Aoun added.

But he noted that “we have benefited from the 1970s experience and we will not repeat the mistake.”

“We don't wish to see Syria being dominated by takfirist groups,” said Aoun.

“We must distance ourselves from the events in Syria to avoid being dragged into the conflict and some parties are not abiding by that,” he added.

Sectarian clashes linked to the 21-month conflict in Syria killed six people and wounded 40 in the northern city of Tripoli on Sunday.

The latest fighting in the city between Sunni Muslims and Alawite co-religionists of Syrian President Bashar Assad came amid growing international concern about the potential for neighboring countries to be dragged into the conflict.

The latest deaths brought the toll from fighting in the city since Tuesday to 19, including two children.

Longstanding tensions in Tripoli escalated when 22 Sunnis from the Tripoli area who had crossed into Syria to join the armed rebellion against Assad's rule were ambushed by troops in the town of Tall Kalakh on November 30.

Damascus later agreed to repatriate the bodies at the request of the Lebanese foreign ministry, and on Sunday the corpses of three of the slain fighters were received at the Arida border crossing.

“We must distance ourselves from the conflict in Syria to avoid being dragged into the conflict and some parties are not abiding by that,”

= are you talikng about hezbollah which openly said they were in syria "defending" lebanese villages instead of letting the syrian protect its own villages? lol
because i didn t hear any other political movements saying openly that they were engaged!

"and we don't wish to see it ruled by takfirist groups,” = nobody wants that....

"The Arab Spring is not a spring because of the chaos that happened and this 'creative chaos' is what the Americans had promised us,”
didn t you say a few years ago that there were NO SHAME in asking help from the americans? lol

just go educate yourself, no time to waste with idiots...

hahaha I love the frustration of peace. The only answer 'go educate yourself' yeuh yeuh yeuuuuuuuuuuuuh this really brings your argumentation forward peace ;)
Amen!

-SSNP is outlawed in syria so it cannot possibly be a syrian tool. educate yourself, as peace repeatedly says (but to the wrong people)..

this is my absolute favorite ... hahahahaha says volumes about your intelligence and intellect.

they might arm the rebels ,but your hizb is fighting with the syrian troops whats the difference?

This guy is doing the wrong job, he should have been the boss of a falafel stand keeping his political views and wisdom to his entourage. Bassil would have been great with a frying pan.

a man who sold his values... a man who cannot stand up to HA and say the same to them.. what a disappointment ....nuff said

Does anyone care about what this war criminal has to say? What a pendejo.

Aoun is starting to realize that his master bashar can not survive. What do you expect him to say about the syrian opposition? that they are nice and dandy lol?

Instead of complaining, maybe he should try to concentrate on what happens in post-Assad Syria and to try to steer events in a direction which he can tolerate. He sat back for too long and is reacting to events instead of being proactive. He had to have people telling him that Bashar probably wouldn't survive.

there should be a law that requires politicians to submit to periodical psychological tests before making any political speeches in front of the media.
as a welcomed public service, the press and all media outlets local and foreign, present in lebanon, should also pay more attention to the mental background and public behaviour of all politicians and give the crazy and nutty ones no time whatsoever to air their distorted and inflammatory political views.

I love the spice peace adds everytime. Lek say something that makes senses! Put counter arguments if you have any ;)

Amazingly amusing, it ok for mini Persia to rule Lebanon, but no to similar fanatics with different label to rule Syria...

Aoun is on fire...he won the Lebanese Dental Association elections... finally...after loosing the Medical associations, the lawyers, the Engineers, and all major Universities...
He is trying to make up for his huge loss of popularity this year alone, but that won't do... a lot of christians who were blindly following this fool decided to wake up...good for them!

lol... check your sources FT...
they lost aub and most of their strongholds in usj...defeated at ndu & lau ;)

Journalist student here: If any of you are Lebanese professionals, who has left Lebanon for whatever reason, I would love to have a short interview with you.

Wish all you want CLAuon. Your actions have led you down the path were wishing is the only option you have.

Hypothetically speaking . what if the Syrian regime falls tomorrow ( and it will sooner then later ) i wonder what would Mr. Aoun stand will be on the new power in Syria ? . Mr. Aoun knows that he went on the wrong path in Lebanon , he knows that his clout in the christian community is shrinking .while he became a millionaire by selling his soul.in the next few month he is going to alien him self with the centrist in Lebanon and hope that everyone's memory is short and will not remember his past . well we might forgive but we will not forget