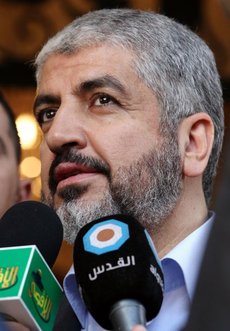 Hamas chief-in-exile Khaled Meshaal, on the third day of a trip to Gaza, told students that different situations called for different measures -- from rockets to a truce.

He also renewed his call for efforts to implement a stalled Palestinian reconciliation deal between his Hamas faction and bitter rival movement Fatah, which is led by president Mahmoud Abbas.

Speaking at the Islamic University in Gaza City, Meshaal appeared to back the continuation of a truce agreed between Israel and the Hamas movement last month, which ended an eight-day conflict in and around Gaza.

"Oh, young men and young women, we surprised the enemy, neither Netanyahu, nor Lieberman, nor Barak believed that the population of Gaza, this small but wonderful piece of land, would dare to bomb Tel Aviv," Meshaal said.

He reiterated a call for Palestinian unity he made at a Saturday rally celebrating the 25th anniversary of the founding of Hamas which rules the Gaza Strip.

"Palestine is too big for a single movement," he added. "Palestine is for all of us, we are partners in this nation. Hamas cannot do without Fatah or Fatah without Hamas, or any movement."

Meshaal is on his first ever visit to the Gaza Strip for a trip timed to coincide with the Hamas anniversary, which also follows a ceasefire deal between Israel and Hamas that ended November 14-21 fighting in and around Gaza.

The conflict left 174 Palestinians dead -- more than 100 of them civilians -- as well as six Israelis, four civilians and two soldiers.

Anyone guess where that money will go to? Certainly not to rebuild housing, road and other infrastructure, it will go to buying more weapons. It's about time that anyone wanting to contribute to the Gazan economy should simply send in the materials or the food etc., never send in a single cent.
Will any of that money go to pay the debt of Gaza to the Israel Electricity Corporation for the electricity that has been supplied over the years ?