Hundreds of Sudanese in Protest Call for 'Revolution' 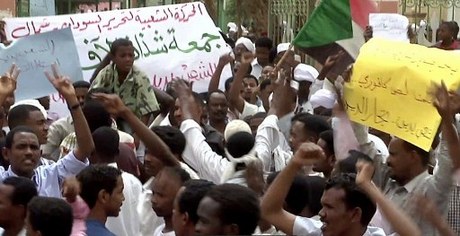 Hundreds of Sudanese called for "revolution" on Monday, the second day of protests in support of four dead students originally from the conflict-plagued Darfur region.

Their deaths, following a crackdown on a tuition protest at Gezira University south of Khartoum, have sparked the largest outpouring of Arab Spring-style discontent since anti-regime protests in June and July.

A crowd of about 700 people came out of Nilien University, in Khartoum's west end, shouting "Revolution until victory" and "Killing students is the killing of the nation!", an Agence France Presse reporter witnessed.

Police responded with tear gas and some protesters were beaten with batons, he said.

Some scattered into the city's main bus terminal nearby, where several truckloads of riot police were already on standby.

An AFP reporter also observed pickup trucks with plainclothes security agents in the area, the scene of violent clashes on Sunday.

The main road through the bus terminal was charred from a fire which burned during Sunday's unrest when, an AFP reporter said, six people were injured, a bus was torched, and police fired tear gas.

Official radio said 47 people were detained on Sunday when hundreds protested in the area.

On Monday people also protested outside an agricultural faculty in Khartoum North, a witness said. Security forces fired tear gas and used batons against about 300 people protesting the students' deaths, he said.

The Darfur Students Association said all four had gone missing after taking part in a peaceful sit-in which was disrupted by the pro-government student union.

The four died "fighting for their right to free education in the university," their association said, blaming authorities and their "militia" for the deaths.

Gezira University chancellor Mohammed Warag told reporters on Monday that he and other campus administrators viewed the dead students in the morgue.

"We didn't see any injuries outside the bodies," he said.

Under a 2011 peace deal between the government and an alliance of Darfur rebel splinter factions, the offspring of people displaced by Darfur's nine-year rebel-government conflict are supposed to get a five-year fee waiver at national universities.

But Warag said the agency administering the peace deal, not the university, determines eligibility for the waiver.

The university's dean of students, Rudwan Ahmed, said police were called last Tuesday because some participants in the sit-in forced lecturers from their classrooms and attacked laboratory technicians.

He said 52 people were detained and then released. The four later found dead were not among the detainees, Ahmed said.

In June and July demonstrations began at the University of Khartoum over high inflation and then spread to involve scattered protests throughout the country, calling for the fall of the 23-year regime of President Omar al-Bashir.

They petered out following a security clampdown.

The death of student activist Ahmed al-Qureshi in 1964 sparked the "October Revolution" which ended the military regime then in power after tens of thousands protested.