U.N. Says Convoy Fired at in Libya, No Casualties 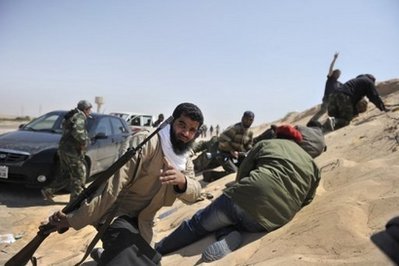 Unknown attackers fired at a convoy transporting United Nations personnel east of the Libyan capital on Wednesday, a U.N. spokeswoman told Agence France Presse, adding that no one was hurt.

"Yes, indeed there has been an incident. A U.N. convoy was shot at. There were no injuries," said Radia Achouri, confirming reports that the attack took place in Khoms, 100 kilometers (60 miles) east of Tripoli.

This is the second attack on a U.N. convoy in Libya this year.

On April 10, an explosive device was thrown at a convoy carrying Ian Martin, then head of the U.N. mission to Libya, wounding one person.

Security is the biggest challenge faced by the North African nation in the wake of a conflict that toppled strongman Moammar Gadhafi last year.

Libya became field of terries’, Islamic militias have got the power and running the country now and nobody from the formal Gov can do anything with them, unless some times they could not protect their self. Well done western we have said from the first day of the uprising that the only one who gonna take advantages from the intervention is those Islamic trend.