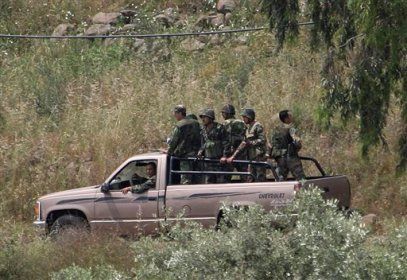 The residents of the Wadi Khaled town of al-Boqaiaa have fled their homes on Friday as a result of heavy shooting coming from the Syrian side, the National News Agency reported.

"Gunfire from light- and medium-caliber weapons and shells coming from Syria have landed in al-Boqaiaa area of Wadi Khaled near the Lebanese side of the Grand River,” the NNA said.

Al-Boqaiaa residents said they have heard gunfire and shell explosions on the Syrian side of the river, without knowing their source or motive.

"Some of our houses have been targeted,” the residents said explaining the reasons that made them chose to flee their town.

Meanwhile, OTV reported that gunmen in Wadi Khaled were shooting towards Syria and the Syrian army responded with fire.

Since the eruption of the Syrian war in March 2011, Syria's army and some opposition fighters have repeatedly violated the Lebanese border in the north and the Bekaa.

Who would benefit from dragging Lebanese people into fighting the regime? I guess the regime doesn't have enough people to kill.