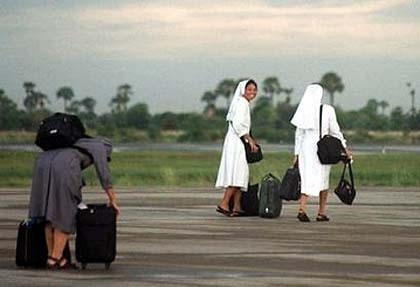 Six women dressed as nuns stood anxiously in a queue at Manila's chaotic international airport, unaware their shoes were about to end their dreams of an illegal job abroad.

At the immigration counter, an official looked up after stamping a genuine traveler’s passport and surveyed the women.

"People were wondering, if they were nuns then why was one nun in rubber shoes and another in red shoes," said airport immigration chief Lina Andaman Pelia.

"And all six just had one bag. You could tell they weren't real."

Under questioning, the "nuns" admitted they were not heading to a religious seminar in Hong Kong as claimed, rather to Lebanon to work illegally as maids.

And so -- just like thousands of desperate Filipinos before them who have tried to use a dizzying array of tricks in an effort to head overseas for a higher paying job -- their journey was over before it had begun.

Deep poverty in the Philippines has for decades driven Filipinos abroad and about nine million -- or 10 percent of the population -- currently work legally and illegally in a wide range of jobs overseas, according to government data.

While the Philippine government allows its citizens to work overseas, it requires them to have guaranteed labor contracts and to register with state-approved recruiters.

The government says these measures are needed because Filipinos who go abroad can easily be exploited in many ways and, at worst, be forced into crime or prostitution.

Sometimes the country they want to work in has been blacklisted completely, such as was the case with the fake nuns, with the Philippines banning people from working in Lebanon in 2007 due to security and labor concerns there.

But many Filipinos seek to circumvent these rules, with illegal recruiters often setting up the scams.

"We have economic problems in this country and sad to say, they become willing victims," Pelia said, referring to the Filipinos who sneak overseas to work illegally.

Pelia said many prospective illegal workers simply presented themselves at airports as tourists, and it was up to the immigration officials to determine their real motive for traveling overseas.

At the immigration desk, staff looks for signs to distinguish the illegal workers from legitimate tourists.

Pelia said the give-away could be a bare passport indicating the person had not traveled abroad before, or a plan to "holiday" in areas of the Middle East not normally known to attract Filipino tourists.

She said illegal workers were sometimes caught out by being unable to answer the simplest of questions, such as: "Where are you going?" or: "Who is providing for your tour?”.

But on other occasions, they put more thought into their ruse.

Pelia said the government now coordinated with sports bodies to verify which athletes were heading overseas, after some workers made it to Japan by claiming to be volleyballers bound for an Asian Games there in the 1990s.

Immigration officials are also constantly on the lookout for Filipinos seeking to head abroad for work as prostitutes who travel with fake boyfriends, Pelia said.

"Carlos", a 35-year-old laborer, said he beat the system three years ago when he entered Japan to escort his mother on a vacation there.

When his mother returned home two months later, Carlos did not come back.

Instead, under a plan hatched by his family, he was sheltered by his sister, who already had permanent residency in Japan.

"We were always terrified that Japanese immigration would track me down to her house and burst in at any time. But they never came," said Carlos, who spoke to Agence France Presse by telephone on condition his real name was not used.

Carlos said his sister helped him find a job as a construction worker in Japan, and he now earns the equivalent of about 26,000 Philippine pesos ($600) a month, three times what he could earn at home.

The problem of Filipinos being exploited saw the U.S. State Department place the Philippines on its "tier 2 watch list" for human trafficking in 2009.

This meant the U.S. government believed the Philippines was failing to comply with "minimum standards" on stopping human traffickers.

The government says it has since sought to tackle the problem more seriously.

About 25,000 would-be illegal workers have been stopped from leaving the Philippines since a crackdown began in August last year, according to Chrissy Avila, a lawyer with the government's anti-trafficking task force.

And 28 traffickers have been convicted since the start of last year, with some of them being sentenced to life in jail, according to the task force.

But Avila said the prospective workers, who are not punished if caught, often remain determined to try again because of the deep social problems and poverty at home.

"What they have in mind is that they are going abroad to have a better future, to earn dollars. They don't mind the fact that they might be victims of illegal trafficking," she said.