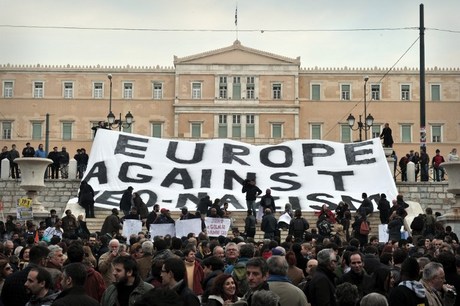 Hundreds turned out in Athens on Saturday to protest against racism and a surge in neo-Nazi activities in Greece and other European countries, in a demonstration backed by prominent European figures and human rights activists.

Police said about 500 people rallied in Athens' central Syntagma Square opposite the Greek parliament, alongside a large banner reading "Europe against neo-Nazis". Organizers put the number at nearly 1,000.

Anger was mainly targeted at Greece's far-right Golden Dawn party, which won seven percent of the vote in general elections in June, allowing it to enter parliament for the first time as the country reels from years of financial crisis.

The party is suspected of masterminding a series of attacks against immigrants and minority groups over the past several months.

"It is very important that we, representatives of 20 European countries, come to Athens to show our solidarity with Greece, a country that is hit very hard by the crisis, and to fight against the surge of Golden Dawn, Europe's most dangerous neo-Nazi movement," European Grassroots Antiracist Movement chief Benjamin Abtan said.

"Our message goes out to the entire Greek society and all of Europe: this demonstration is only the beginning of the fight against neo-Nazism not only in Greece but also in Europe."

Immigrants' representatives in Greece as well as left-wing parties, trade unionists and Greek and European human rights activists marched in silence from Syntagma Square to the foot of the Acropolis, about a kilometer (half a mile) away.

Police earlier Saturday briefly detained five activists -- an Albanian, a Croat, two French nationals and a Greek -- as they tried to unfold the huge banner, later seen in the square, on the hill overlooking Athens, Abtan told AFP, branding the arrests "abusive".

"Police intimidate when they should be cracking down on racist violence in some Athens neighborhoods," he said.

"Racist, antisemitic and denying holocaust speeches, as well as the increasing number of violent behaviors in Greece, jeopardize the fundamental values of democracy, in the very country where it was born," Abtan's group said on its website.

Finally, someone in Europe is willing to stand uip against racism and neo-Nazism.