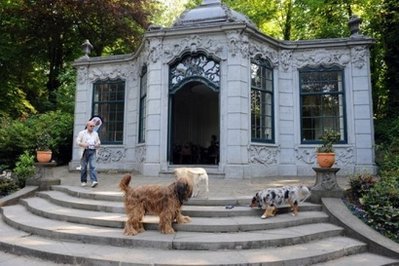 Marshall ordered an ice-cream but left in a huff before the waiter dished it up, Smile woofed down the chicken but showed no appetite for the wholesome carrots and apple left on his plate.

In no time, his brown leftover had attracted two hungry customers who licked and digested it without fuss, while tiny Elliot then breached every rule of dining etiquette by scrambling atop a table to tuck into his hamburger.

It was the Toutou Bar's -- Toutou meaning doggie in French -- first day of business, and a gaggle of labradors, collies and schnauzers were having a field day, sniffing for scraps when they weren't sniffing each other.

"Try our beer!" said Schol. "Belgians love their beer so we developed a brand specially for dogs."

Brewed with none less than doggie-favorite bone-marrow, his Red Dog Energy Beer comes in iconic small brown bottles with a cap found in busy bars across a country boasting over 800 beer varieties -- and an average consumption of almost 100 liters a year.

Schnauzer Poulette nevertheless seemed underwhelmed by the alcohol-free brew -- unlike her owner, who after kneeling down to dip her fingers in the doggie-bowl of beer by the knee-high doggie table, opined: "It's good."

Like other classy specialist dog restaurants the world over, Schol described the a la carte menu in what he believes is Belgium's first like establishment as specifically designed to cater to the needs of human society's four-legged friends.

To suit a dog's palate, the ice-cream comes without sugar and the meats and vitamin-rich veggies are unspiced. But the canines' owners could sit and enjoy the same platters, on condition of adding salt and pepper.

"It's the purest sort of food a dog would eat naturally," Schol said.

The just-opened Toutou Bar claims its fame from the statue of comic-book hero Tintin and his iconic pup Milou (known as Snowy in English) erected in the leafy Wolvendael park home to the restaurant. Herge, the creator of Tintin and Milou and one of Belgium's few famed sons, is buried nearby.

Set in a well-heeled Brussels district, the park is a pooch-owner's paradise where dogs may ramble off-leash early in the morning and from 6:00 pm to 10:00 pm at night.

"I think it's a great idea, there should be more places that welcome dogs," said Georges Blau-Turner, owner of impatient ice-cream loving Marshall, a cross between an Australian sheepdog and collie.

But the pooch-pampering initiative is already raising eyebrows.

"In Belgium, it's better to be a dog than to be poor," said another. "We're being Americanised," added someone else.

Schol brushed off such criticism as "griping from the usual whingers," but did admit that clearing the tables once the animals had finished had its disadvantages.

"People don't usually throw their plates on the ground," he said.