Aoun: The Danger on Lebanon is Great and al-Qaida is One Step Away 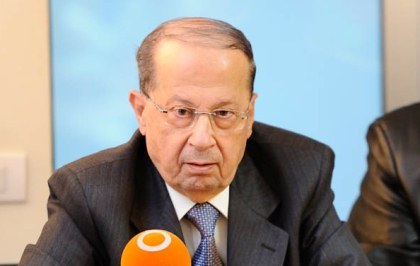 Free Patriotic Movement leader MP Michel Aoun warned on Saturday against the danger on Lebanon that could result from Syria's conflict, explaining that al-Qaida's presence would soon be felt in the country.

“Al-Qaida is one step away from being present in Lebanon, and once here, it will announce an (Islamic) Emirate in the north,” Aoun said in front of a delegation of students who won the Antonine University elections.

The FPM leader added: “What is happening in Syria now is very dangerous and threatens our existence, especially since the revolutionaries are radicals”.

Aoun called on the students to be aware of the regional changes and conflicts that could threaten Lebanon's stability.

“They want to make us focus our attention on the electoral law but we should not forget where the real danger is,” Aoun explained.

“The number of Palestinians in Lebanon is nearing 1 million,” Aoun said commenting on the arrival of refugees from Syria through the border, expressing that this is a “real danger from which our attention should not be deviated”.

“Nations supporting the revolutionaries in Syria with money and arms are obliging Palestinians to flee the war-torn country,” the FPM leader said, questioning why these regimes do not “take responsibility of the refugees instead of blaming us and putting the entire burden on Lebanon".

An air strike on the Yarmuk Palestinian refugee camp in Syria have caused the eruption of Clashes between the pro-regime Popular Front for the Liberation of Palestine-General Command against rebel fighters, some of them also Palestinians, according to the Syrian Observatory for Human Rights.

Around 10,000 Palestinians had fled from Syria to Lebanon and since the latest violence another 3,000 had crossed the border or were in the process of crossing, UNRWA deputy chief of staff Lisa Gilliam.

“Some parties in the country are encouraging people to go fight in Syria and this might have catastrophic results on Lebanon,” Aoun noted.

“Al-Qaida and other extremist organizations are found in Syria not Lebanon, thus beware of what comes from outside and is supported internally,” he ended.

LOL ... just because Aoun supports HA does not mean he doesn't have a point about what is happening in Syria ...

As do most you equate the situation as being two sided ... it is not. The scenario is very complex and knee jerk condemnation is dangerous.

and a kneejerk condemnation of the revolution is also very dangerous.

Dear God was it not last month that he was saying that M14 did not want a new electoral law and were trying to keep the 1960 law? Now they are doing it to divert attention? Still can't believe people buy his b.s.
I do agree with him about not sending LEBANESE to go fight in Syria and that includes his buddies hizballah TZ which he conveniently overlooks! What a major hypocrite.

apparently, he isn't a major hypocrite, he's a general hypocrite.

it is unbeleivable how this guy drags the country to ruin & then washes his hands from the consequences... PONCE PILATE

hahahaha!!! grandma has spoken! next week she ll tell us that the big bad wolf is coming to eat the lebanese!
beware citizens of lebanon! tripoli is an evil city! bloodthirsty sunnis are marching there! .....

“Some parties in the country are encouraging people to go fight in Syria and this might have catastrophic results on Lebanon,”

i guess he is talking about hezbollah also !

"M14 are just as treacherous by hating on your every word"

stating facts is now treacherous? or treason for you aoun lover is to be against M8 LOL!

oh! kiserwanimoughadram is right when he says he sold his dignity: is he still saying the same things? NO because he sold himself to the highest bidder....

so either your aoun said the truth before or now:

only meaning that he says what suits him best to stay in power and he is a big liar....

no answer from the roar: seems truth hurts him and is coward enough not to reply....

the only traitors are the ones that Support Aoun and Hizb ..they are the only ones doing the dirty deeps of Syria and Iran

what a low life ,he would say anything to stay in power.its about time he retired to a mental hospital and spared us his demented speeches.

After the arrest of the terrorist Samaha Bashar was left with this filthy coward to spread his bull.

If he would only talk to his SIL and get the electricity situation going in the right direction, people wouldn't be mocking him as much...

of course, he should probably have someone tell him what he said 10 years ago first so he doesn't sound like he completely sold out to the highest bidder, ie HA.

It's all part of the Saudi plan. And thanks to M14 for supporting such plans that will destroy Lebanon.

what plans to destroy lebanon please?

Hey Aoun....the Hezz already strangle us daily. The people that are "one step away" are not as urgent of a threat.

Why your supporters have not provided the Lebanese Army secret services the pictures of the plane they claim it flew to Israel and was shot-down.
You really care about the state you live in when Iran and Syria says so?

How about Smaha? was he trying to clean up Lebanon from Al Quaeda by planting bombs in the North?

Aoun carries so much hatred against his opponents which makes him blind against what is right or wrong. There is so much defiance among the Lebanese that Aoun's followers will accept any thing he says. Syria and HA take advantage of him as he weakening the Christians who are the vital blood of this country and who contribute significantly in the rise and strength of this country, some thing that both Syria and HA are against.