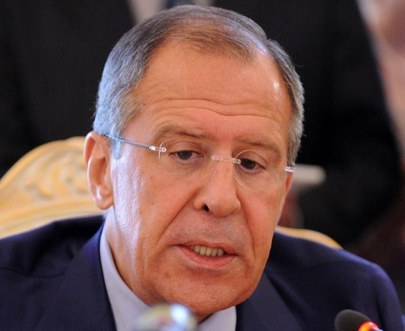 Russia said on Monday it would be "political suicide" for the government of Syrian President Bashar Assad if it used chemical weapons against the armed opposition.

Foreign Minister Sergei Lavrov said in an interview released by the English-language state television channel RT that Assad had given Moscow repeated assurances he had no plans to order such an attack.

"I do not believe Syria would use chemical weapons," Lavrov said in comments translated by the channel into English. "It would be a political suicide for the government if it does."

Russia has remained Syria's main ally throughout 21 months of violence that an opposition monitoring group says has claimed more than 44,000 lives.

It scuttled three rounds of U.N. Security Council sanctions against Assad and condemned Washington for recognizing the Syrian opposition as the legitimate voice of the country's citizens.

But Russia also remains one of the only nations to remain in constant contact with Assad -- a status the West has urged it to use to pressure the Syrian strongman to cede power.

Lavrov said Moscow checks on every report about the movement of Syrian chemical weapons with Damascus in order to make sure there was no danger of their possible use.

"Every time we hear rumors, or pieces of information come to surface that the Syrians are doing something with the chemical weapons we double-check, we triple-check, we go directly to the government and all the time we get very firm assurances that this is not going to be used under any circumstances," Lavrov said.

this clearly means the assad regime is abut to use chemical weapons!
what a murderer, and all who support him are worse than he is.
aoun and nasrallah should be judged for crimes against humanity for supporting this murderer.

"strongman"? He's anything but a strongman.

The russians will harvest in Syria what they sowed, another disasterous failure similar to their failure in afghanistan. There too najibala, the former afghani dictator, used migs and scud missles plus russian invasion and killed more than 1 million afghani. What was the fate of najibala after ten years of genocide? he was hanged by the rebels. In syria, it will not take ten years and the rebels will chase this moron bashar all the way to his qerda7a. The alawite mini state he is dreaming of is a mere fantasy and exists only in his head that lacks iq.

Americans also failed in Afghanistan, it become a terrorist state in which "Sheikh Osama" used as a training based to launch 9/11...

I totally agree with you. Taliban are coming back. All these countries will be full of terrorists from Iraq, Afg, Pakistan, Syria, Lybia, etc. US policies are working very well realist NO?

the longer the war the more Russia benefits, after all both sides are using Russian made weapons. weapons and their ammo aren't free!

important question for pro Assad members.if the rebels are nothing but salafi terrorists sent by israel, then why oh why are assad, iran, and russia calling for a unity goverment?!? assad propaganda always contradicts itself!!

I should remind you that m8 members kept claiming for over a year that nothing is happening and that its only a few people on bicycles. you might support legitimate change but assad didn't he made it clear absolute power or nothing. mind you the first few months there was no rebels just demonstrators getting gunned down by assad's orders