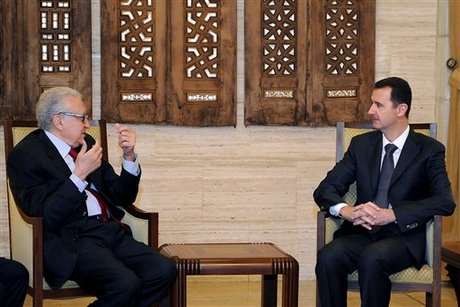 "I had the honor to meet the president and as usual we exchanged views on the many steps to be taken in the future," Brahimi told reporters at his Damascus hotel, a day after he arrived to launch a fresh bid to end the conflict roiling Syria.

The U.N.-Arab League envoy said the Syrian crisis was "always worrying", with more than 44,000 people killed since the uprising against Assad's regime erupted in March last year, according to the Syrian Observatory for Human Rights, which relies on a network of medics and activists on the ground.

Brahimi expressed hope that "all parties are in favor of a solution that draws Syrian people together."

"Assad expressed his views on the situation and I told him about my meetings with leaders in the region and outside," said the veteran Algerian diplomat who took over his present task from former U.N. chief Kofi Annan.

Assad described the meeting as "friendly and constructive," according to state television.

"The government is committed to ensure the success of all efforts aimed at protecting the sovereignty and independence of the country," Assad said.

Brahimi last visited Syria on October 19 in a bid to clinch a temporary ceasefire for the Muslim feast of Eid al-Adha. Despite pledges, the truce did not hold.

His arrival in Syria on Sunday coincided with reports by activists that at least 60 people were killed in a regime air strike on a bakery in the town of Halfaya, in the central province of Hama.

The activists said the attack, in which many women and children were killed, amounted to a "massacre".

The official news agency SANA however on Monday blamed the killings on an "armed terrorist group" -- the term used by the regime to describe rebels fighting to topple Assad.

"An armed terrorist group attacked the town of Halfaya committing crimes against the population, killing many women and children," SANA said, adding that the Syrian army intervened during the assault and "killed and wounded many terrorists".

Brahimi recently held talks with U.S. and Russian officials, who hold opposite views on how to deal with the Syrian crisis.

Washington has repeatedly called for the ouster of Assad, while Moscow still remains one of the few staunch supporters of the Damascus regime.

Brahimi arrived in Syria on Sunday from Lebanon. He had last visited the country on October 19.

During that trip he met Assad and other officials to clinch a temporary ceasefire for the Muslim feast of Eid al-Adha. Despite pledges, the truce did not hold.

Had the honor? Anyway, tell us what kind of food are you going to be eating with his honor?

jc, You have to give credit to Assad and even his father, like them or not. In the end, foreign diplomats, be it american, arab, icluding lebanese will visit the Assads for solutions.

Mr Brahimi, you have bad track record when you tried to resolve the lebanese crisis in the eightees...So I don't see how you are going to succed now in the Syrian crisis...You cannot keep tapping on the criminals backs (Had the honour...)...This is a bad strategy...Anyway, good luck with your efforts...

Mr Brahimi, you have bad track record when you tried to resolve the lebanese crisis in the eightees...So I don't see how you are going to succed now in the Syrian crisis...You cannot keep tapping on the criminals backs (Had the honour...)...This is a bad strategy...Anyway, good luck with your efforts...

How could anyone have ¨the honor¨ to meet with the butcher of the 21st century?

At least he will be eating as he wishes and not as you would expect under the rule of Sharia and Salafist dictators.

the honor of the arabs,is very loose.what is the definition of "honor".

peace? what peace? if the Syrian wanted peace, they wouldn't have revoled against the dictator. He must go.

Ya Bashar you should hope this is not the night the rebels break through and get their hands on you and your satanic mother and wife.