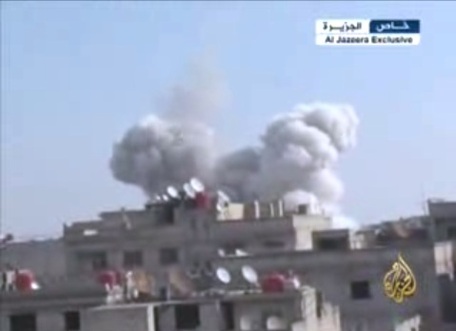 Warplanes carried out several strikes on Monday on rebel-held areas in the Eastern Ghouta region near Damascus, where fresh clashes pitting insurgents and troops erupted, said a monitoring group.

The area east of Damascus is home to some of the rebel Free Syrian Army's fiercest and best organized groups. Several towns in Eastern Ghouta have become key flashpoints in Syria's conflict, as the violence draws ever nearer to the capital.

Analysts say the regime of President Bashar Assad is trying to secure an eight-kilometer (five-mile) radius around the capital so it can be in a position to negotiate a solution to the nearly two-year conflict.

In Damascus, violent battles raged on Sunday night in the northeastern district of Qaboon and on the road separating the southern Palestinian camp of Yarmuk from neighboring al-Hajar al-Aswad, the Syrian Observatory for Human Rights said.

The Observatory also reported fierce army shelling on the central province of Hama, scene of a massacre of some 60 people on Sunday at the entrance to a bakery in the rebel-held town of Halfaya, according to the Observatory.

Shelling was also reported in the central province of Homs and Daraa in the south.

Monday's violence came a day after at least 198 people were killed across the country, just as international peace envoy Lakhdar Brahimi arrived in Syria to launch a new bid to resolve the spiraling war.

More than 44,000 people have been killed in violence across Syria since the outbreak of an anti-regime revolt in March last year.

Tomorrow the regime will say it was terrorists

When the FSA is at the front door of the palace where will he bomb?