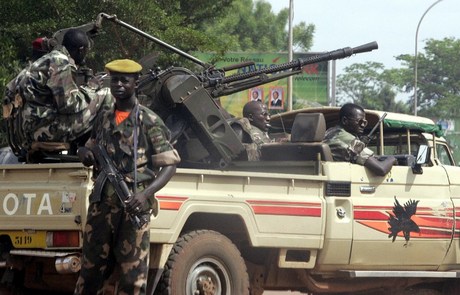 Angry demonstrators hurled projectiles and tore down the French flag at France's embassy in the Central African Republic capital Bangui on Wednesday, protesting at a lack of help to deter rebels who have occupied a large swathe of the country.

Former colonial power France "has the tendency to abandon us," a protester said as the group arrived from an earlier sit-in outside the U.S. embassy. "We no longer need France, France may as well take its embassy and leave."

Protesters close to embattled President Francois Bozize had begun their U.S. embassy protest chanting calls for peace just as rebels approaching Bangui called on forces loyal to Bozize to lay down their arms.

But the peaceful protest moved to the French embassy where the mood turned violent and demonstrators broke windows and pulled down the French flag.

The offices of Air France were also attacked, an AFP reporter witnessed.

Since the end of colonization in the 1960s, French troops stationed in western Africa have often come to the help of former colonies whose regimes were on the verge of being toppled.

The Seleka rebel coalition now controls large swathes of the north and the east of the country.

Neighboring Chad has sent troops into the country after a request from Bozize to try and stem the rebel advance.

Seleka is made up of rebels who say the government has not honored peace accords signed between 2007 and 2011, which offered financial support and other help for insurgents who laid down their arms.