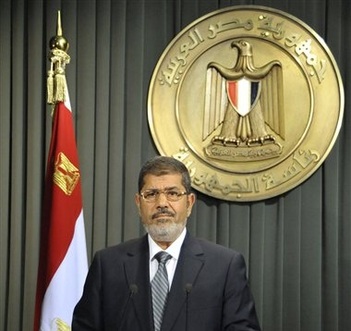 Egyptian President Mohamed Morsi on Wednesday hailed an Islamist-backed charter he pushed through despite fierce opposition protests as "a new dawn" for his country, and said he would now tackle a teetering economy.

In a televised national address, Morsi said he would reshuffle his government and renewed an offer of dialogue with the largely secular opposition.

But while "mistakes on both sides" occurred as the new charter was drafted and put to a referendum that gave it 64-percent voter support, he remained defiant over the "difficult" decisions he made.

"I only took decisions for God and in the interests of the nation," said Morsi, who hails from Egypt's Muslim Brotherhood.

The result, he contended, holding up the constitution, would cap nearly two years of turmoil since the overthrow of Hosni Mubarak in February 2011, and allow Egypt to enter "an era with greater security and stability."

The opposition, however, has already dismissed the new charter and said it would fight on, challenging its legitimacy and positioning itself for legislative elections that are due within the next two months.

The head of the opposition National Salvation Front, Nobel peace prize laureate Mohamed ElBaradei tweeted that the constitution was "void" because it conflicts with international law in regard to "freedom of belief, expression, etc".

The Front sees the charter as a possible tool to introduce strict Islamic sharia law by weakening human rights, the rights of women and the independence of the judiciary.

It also stressed that just one in three of Egypt's 52 million voters took part in the referendum.

Protests against the charter, and against a decree -- later rescinded -- giving Morsi near-absolute powers, have taken place since late November. Some of them turned violent, including clashes on December 5 that killed eight people and wounded hundreds.

The likelihood of prolonged "elevated" political conflict despite the adoption of the constitution prompted the ratings agency Standard and Poor's this week to knock Egypt's long-term credit rating down a peg, to "B-".

A $4.8 billion loan the International Monetary Fund put on pause this month has also made investors anxious, and raised the risk of Egypt's currency going into a nose-dive as the central bank burns through its foreign reserves.

Authorities have already banned travelers from taking out or bringing in more than $10,000 each.

Tourism, a mainstay of the economy, has also not recovered from a 32 percent decline that happened when the early 2011 revolution erupted to oust Mubarak.

Morsi said in his speech that "I will deploy all my efforts to boost the Egyptian economy, which faces enormous challenges but has also big opportunities for growth."

He was in consultations with Prime Minister Hisham Qandil on the ministerial reshuffle as part of "the changes necessary for this task."

Morsi argued that the new constitution will allow Egypt to enter "an era with greater security and stability" and vowed to promote "growth, progress and social justice."

The United States, which gives $1.3 billion a year to Egypt's influential military, has called on Morsi to work to "bridge divisions" with the largely secular opposition.

"We have consistently supported the principle that democracy requires much more than simple majority rule," acting State Department spokesman Patrick Ventrell said in a statement on Tuesday.

It would have been a new dawn for Egypt have the minorities hailed the constitution, not when you hail a constitution drafted by you moron. As it stands now it is a new dusk for Egypt which will go on until the majority learns how to value and protect the minorities.

I strongly support a secular state and strongly oppose the brotherhood, but why is Egypt being picked on? "We have consistently supported the principle that democracy requires much more than simple majority rule" said the White Man..Really??? In Israel and KSA, the minorities have zero voice and representation and they do not even have a CONSTITUTION so they can persecute the minorities.

I'm not worried for the Egyptians, should this Islamist go to far in his reforms, they'll kick him and his friends out.

agreed, i'd like to know how many of the commentators have actually read the constitution before coming here and spewing their stupidity.

I hope so. Otherwise all that blood they spilled to free themselves would have ended up replacing one dictator with another.

A 21% vote in favour of this new constitution can't really be called the backing of the country.

63.8% voted in favour of the constitution, the opposition did NOT call for a boycott they called for a NO vote so you can only assume that those that voted are representative of the whole population.

"It also stressed that just one in three of Egypt's 52 million voters took part in the referendum."

63.8% of the people that voted, voted in favor of the referendum. The opposition did call for a boycott that is why only 33% of the egypitian voters voted. there are 52 million egyptian voters , if you do the math, that means only 11 out of the 52 million voted for this referendum. You have a long way to go in convincing anyone this is what the egyptian people wanted when they took to the streets to earn their freedom with their blood.

None of the main opposition groups called for a boycott. The so-called national salvation front called for a no vote as did the abuAlfotooh-6th April movement because of this we must conclude that the vote is representative of the people you cannot conclude otherwise.

why do you have a long way to go when they did Parliamentary elections Islamists took 70% of the vote so why are you surprised that 63.8 % voted yes on the constitution???

They have a long way to go because they don't respect minority's rights to live free. No one beleives that you should not rule by majority as that is the true essence of democracy. However, a vaiguely written constiturion that infringes on people's right to live free based on religion and sex is wrong in any state. I would love nothing more than whomever is in that seat to fight for the people. Be a president of the people. all the people, even the ones that did not vote for him/her. All I am saying is they are no where near there and have a long way to go.

alright that is your opinion but it is clearly different that the people's but please don't misrepresent things to make it seem like the vote is not representative or somehow flawed...again you may disagree with the people's decision but that's not the point here, this is what they chose.

Mohammad_ca. I tend to agree with you on a lot of your comments here on Naharnet. Howerver, I disagree with you on this one. As I stated with my post, the numbers show that 11 million out of the 52 million voters agree with the referendum. I am not misrepresenting anything there. On an article that is the heart of a country's future that is weak by any standard. Especially a country that is going through a revolution of overthrowing a dictator. I am not saying that is not what the people chose, that is clearly what the people that voted chose and that is what they have to live with until THEY decide if it is good or bad for them. My opinion is this is flawed and will not last. It needs to be revised (my opinion).

I think if the people do not agree with it they will make sure that they vote for whoever is going to change it.