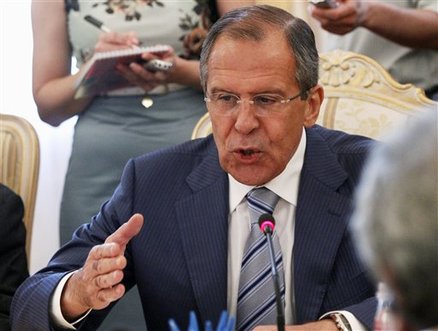 Russia on Thursday warned of "bloody chaos" in Syria should peace talks led by U.N.-Arab League envoy Lakhdar Brahimi fail to end the 21-month conflict estimated to have claimed more than 45,000 lives.

"The alternative to a peaceful solution is bloody chaos. The longer it continues, the greater its scale -- and the worse things get for all," Foreign Minister Sergei Lavrov told the Interfax news agency.

Russia remains Syria's most important international ally and is one of the few nations to have unlimited access to Syrian President Bashar Assad's government.

Lavrov's meeting with the Syrians came as Brahimi wound down several days of talks in Damascus by calling for "real change" and the quick introduction of a transition government "with all powers".

Assad's government has still not responded to Brahimi's call.

But the armed opposition immediately rejected any transition plan that would see either Assad or his immediate cohorts retain their positions of authority.

Brahimi will meet Lavrov in Moscow on Saturday in hopes of convincing Russia to do all it can to make sure that Assad accepts an accord that would gradually ease him from power.

Lavrov did not disclose the full details of his talks with the visiting Syrian delegation.

But he conceded that hopes were fading for a Russian-backed initiative drafted in Geneva in June that made no explicit call on Assad to step down -- an alternative the ruling regime appeared to accept.

"Considering what is happening in Syria, the chances for such a solution based on the Geneva communique... are diminishing," Lavrov told Interfax.

"But they still exist, and we must fight for them," Lavrov added.

Russia wants to get out of the syrian mess with minimum damage after they realized they have placed their bets on the losing horse. Even if the regime kills a million syrian, god forbid, it is still doomed and cant be saved.

All this up till now is not considered bloody chaos by the Russians ? How sick is that?

That's the first thing that came to my mind when I read it. what a joke! and these guys are leaders. I guess the joke is on us!

I was thinking the same thing Shab. the blood and carnage so far does not count I guess.

Hey Russia.....think "no more ASSad"....that is the first step toward a solution. But replacing him with another BAAth thug and keeping things the same will also not work.

Forget your base at Tartous, forget drilling for Med. oil. Your horse is dead. You lost.

He should have been saying this a year ago, not now. Talks have failed because Syria refuses to talk to others and nobody trusts the people Syria talks to. If Russia is serious about peace, then it has to take real steps instead of protecting the status quo.

And hopes for a peaceful solution rely on the ASSads leaving as soon as possible--the regime doesn't have legitimacy in the world's eyes any more.