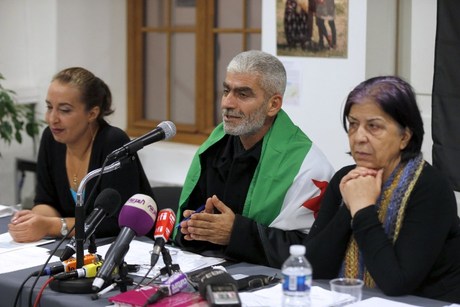 Lama al-Khadra summed up her work for Radio Damascus with a grim phrase: "Our mission was to kill with words."

Along with two other journalists for the state-run radio station, Khadra met with journalists in Paris on Friday after the three fled to France to join with opponents of President Bashar Assad's regime.

Now hoping to set up a pro-opposition station to counter regime propaganda, the three described a climate of fear and paranoia within state media that have remained loyal to Assad amid an uprising that has left more than 45,000 dead.

"It's hard to always wear a mask, to show nothing, to think and talk like them, the men of the regime," Khadra said after reading a "statement of defection" from the three in a bookstore in central Paris.

The one-time head of the station's political and cultural programs, Khadra said she had for months toed the regime's line in reporting events of the uprising that began in mid-March 2011.

"We were confined to following reports from (state news agency) SANA and denigrating the opposition, it wasn't easy," she said.

The newsroom was beset by paranoia, she said, with no one daring to watch anything but state television.

"It was dangerous to watch al-Jazeera without looking like a revolutionary," she said. "Within the official media, many journalists are suffering along with the people."

The journalists said they were under near-constant watch and faced frequent intimidation.

"Some of us were called in by the secret services," said Kamal Jamal Beyk, the station's program director, who fled along with Khadra and Baddur Abdul Karim, the former head of the station's cultural programming.

"We were threatened, as were our families," said Jamal Beyk, who said he was questioned three times by secret police.

"Working for the state media in Syria is like living in an invisible prison," said Abdul Karim.

"We were no longer journalists," she said, describing a newsroom where "some support the regime and don't hide it, while others stay because they have no choice."

Jamal Beyk said "Iranian information experts" had been brought into the newsroom to train journalists and that the "most zealous" pro-regime reporters were sent to Beirut to study with Hezbollah's al-Manar satellite television channel.

The three journalists said they decided to flee after a friend and colleague, Mohammed al-Said, was abducted in mid-July and killed by pro-opposition Islamic extremists.

The three initially fled to Lebanon, before coming to Paris this week with the help of French authorities.

They are now living in an apartment in a southern suburb of Paris and hope to launch a radio station that will be "the embryo of the future public radio post-Assad".

"The revolutionaries have succeeded in creating alternative media. But without a channel for media transmission, there is a gap between those on the ground and opposition officials outside" the country, said Abdul Karim.

They are hoping that with the help of the opposition National Coalition they can create a radio station that would "take the pulse of the Syrian revolution" to "strengthen national unity between Syrians", Abdul Karim said.

Dozens of journalists have defected to the opposition since the start of the uprising. Most quietly left the country for exile in Turkey, Jordan or Lebanon, though some, such as state television presenter Ola Abbas, have opened up about defecting.

For those who continue to work in the headquarters of state television and radio in central Damascus, the threat of kidnapping and assassination is constant.

At least 17 professional journalists, both foreigners and Syrians, and 44 citizen journalists have died while covering the country's conflict, one of the deadliest for the media in recent years.

WHAT??? so SANA was pure propaganda??? damn.. i was fooled.. alot of people on here claimed that to be the God given truth.. second only to al-akhbar..lol..

oh we forgot , the most objective news organizations were Al Jazeereh, Al Arabi, Mustaqbal, and off course Ugarit tv

I think Abdul Karim has taken too many pills, if he thinks by openning a radio station with the help of opposition , he is going to unite us.
After what you see on u tube
hello out there in fantasyland