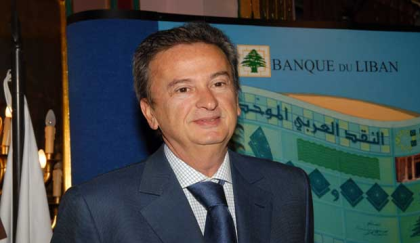 Central Bank Governor Riad Salameh stressed on Monday that the Central Bank of Lebanon will maintain a monetary stability in 2013, assuring that the country had only witnessed a slow down not a recession in 2012.

“The economy is bracing for a slowdown in 2013 but we will not enter recession,” Salameh pointed out in remarks to As Safir newspaper.

He stated that the central bank will pump $2,000 billion into the market, which will lead to a 3 percent growth based on domestic demand.

According to Salameh, this plan could compensate for any growth decline in other sectors.

Asked about the strict measures carried out by the U.S. on Lebanese banking sector, Salameh said that the pressure has eased as the Lebanese banks have implemented firm monitory policies and international regulations on banking transparency.

Lebanon has come under international pressure to abide by international sanctions on neighboring Syria, which include freezing government assets and suspending cooperation with Syria's central bank and some other banks.

These measures include strict control over the transactions of Syrian clients and close monitoring of Syrians who wish to open new accounts.

In 2011, the U.S. Treasury Department and Drug Enforcement Administration said that Lebanese Canadian Bank was designated a "primary money laundering concern" under federal law for allegedly helping a Lebanese-based drug trafficking organization launder as much as $200 million a month in drug profits.

The Lebanese subsidiary of Societe Generale (SGBL) later acquired the assets of LCB.

"the central bank will pump 2,000 Billion USD in the economy".... That is 2Trillion USD. a bit less than Italy's economy... nice going geniuses.

Naharnet, proof read your texts instead of offering cheap sensations.

He's a genius & true professional. Thanks to his wisdom, Lebanon has a solid banking system, one of its few remaining solid pillars.