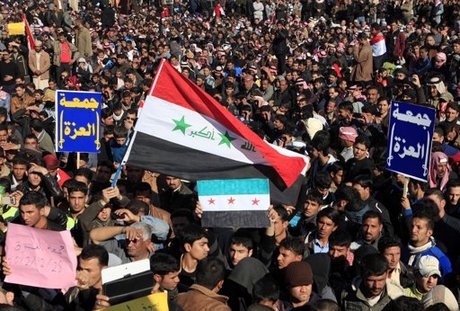 The Iraqi authorities on Monday called for an end to what a senior official said were illegal and illegitimate protest rallies in Sunni-majority provinces that have cut key trade routes.

The protests were sparked by the arrest on December 20 of at least nine of Finance Minister Rafa al-Essawi's guards, and have spurred allegations that the Shiite-led government uses anti-terror legislation to target the Sunni minority.

A statement posted on Alaak's office website acknowledged that the constitution guaranteed freedom of expression, assembly and dissent, but added that such freedoms must be practiced "in a way that does not oppose public order."

"These should not be carried out without the knowledge of authorities and their permission," it said. "What is happening now... is breaking the law and the constitution."

It said government employees must disregard a call from provincial authorities for a general strike aimed at pushing for the release of prisoners.

"All government offices in the provinces should not obey these illegitimate orders, or they will be held legally responsible," it said.

Nineveh province's three-day general strike extends to Tuesday, while Samarra, in Salaheddin province, began its own strike on Monday.

Protesters in Anbar province, meanwhile, blocked off the country's main highway to Syria and Jordan for a ninth straight day.

"what is happening now is breaking the law and the consitution" clearly someone does not understand what a revolution means.

The region is witnessing the crumble of the sayks-piko map, after syria comes iraq, and it seems that the new map will be a sectarian one. After syria, iraq will go through the storm and of course a fake country called lebanon where ma 7a da btee' tani.