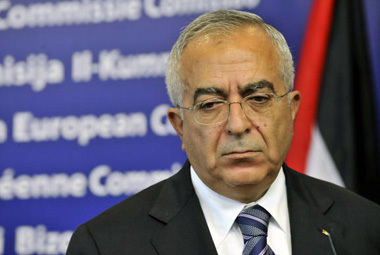 Nearly 300 Palestinians staged a demonstration in the northern West Bank town of Nablus Monday, protesting against the economic situation and against Palestinian prime minister Salam Fayyad.

An Agence France Presse correspondent said the protest came after Fayyad on Sunday announced that the Palestinian Authority would as of 2013 enforce the payment of electricity bills by refugee camp residents, who have so far not had to pay them.

The demonstrators chanted slogans accusing Fayyad of "starving" them, the correspondent said, and one protester tried to set himself on fire.

The crisis has been aggravated by Israel's decision to halt the transfer of tax and tariff revenues as punishment after the Palestinians gained upgraded status at the United Nations.

The Arab League has promised the Palestinians a fiscal "safety net" of $100 million (75 million euros), and Palestinians had hoped to receive it during a visit by League chief Nabil al-Arabi to Ramallah on Saturday.

Arabi did not provide the money, but did discuss the issue in a meeting with president Mahmoud Abbas.

"Israel cannot give up the West Bank from their direct control without exposing themselves to attack,"
I think that this sentence of yours explains the whole situation.
The only attack can be from the Palestinians, whom you thus presume do not want peace.

No Lebanese or Arab will talk to you unless you support the End of the Apartheid Zionist state. Stop begging...you are boycotted!

No Lebanese or Arab will talk to you unless you support the End of the Apartheid Zionist state. Stop begging...you are boycotted!

The two-state solution separate and totally unequal is Apartheid and is dead. In several years the Arabs will become a majority in Israel/Palestine and ethnic cleansing to make the Arab majority a minority like in 1948 is no longer acceptable. The years of Zionist Apartheid is numbered.