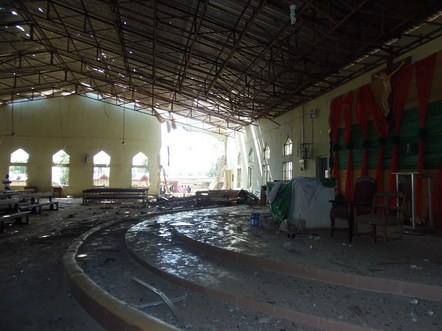 Attackers have stormed a church service in a town in Nigeria's volatile northeast and killed 15 people in the latest such violence targeting Christians in recent days, an official said Monday.

News of the killings emerged after Nigerian President Goodluck Jonathan questioned whether deadly Islamist attacks on churches in his country and other violence worldwide could be signs of coming "end times".

Jonathan also suggested that the Islamist extremist group Boko Haram aimed to take over the Nigerian capital Abuja, but vowed the group would be defeated and claimed that progress had been made in thwarting attacks.

Details were still being confirmed from the remote area where the latest church attack occurred, but it appeared the victims had been shot, said Mohammed Kanar, regional coordinator for the National Emergency Management Agency.

"We received information from our personnel in Chibok that some attackers stormed a church during Sunday service yesterday and killed 15 people," Kanar told Agence France Presse.

The attack followed violence on Friday that saw attackers slit the throats of 15 Christians in a pre-dawn raid in Musari, also in the northeast. Musari and Chibok are located in Nigeria's Borno state, where Boko Haram has been based.

During a Christmas Eve service last week, gunmen attacked a church in northeastern Yobe state, killing six people, including the pastor, before setting the building ablaze.

Violence linked to Boko Haram's insurgency in northern and central Nigeria is believed to have left some 3,000 people dead since 2009, including killings by the security forces.

While the violence has been severe in certain areas this Christmas season, it has been less bloody than in 2011, when scores were killed in bombings and shootings at churches and other locations.

Last year's violence had prompted Jonathan to declare a state of emergency in the hardest-hit areas.

During comments Sunday in which he mentioned attacks on churches in Nigeria, Syria's war and the situation in the Central African Republic, where rebels have pushed their way across the impoverished country, Jonathan spoke of the Biblical end times.

"I was just wondering, could this be a clear way of telling us that the end times are so close?" he told the church congregation.

Some Christians believe in the idea of chaos in connection with the second coming of Jesus Christ, commonly referred to as the "end times". Such beliefs are based on passages in the New Testament's Book of Revelation.

Jonathan was speaking at an evangelical Christian church service in the capital. The church belongs to the EYN denomination, common among Christians in the violence-torn northeast.

Local media quoted the church pastor as saying that 109 EYN members have been killed and 50 branches burnt.

Muslims and symbols of Nigerian authority have often been Boko Haram's targets, but the group has also specifically targeted Christians, including carrying out suicide bombings on churches.

Jonathan has previously accused Boko Haram of seeking to destabilize the government and incite a sectarian crisis.

On Sunday, while speaking of the rebels in the Central African Republic, Jonathan said: "They were quite close to taking over the capital city, just as Boko Haram is taking over Abuja for me and those working in government to run and hide somewhere else."

He vowed however that Boko Haram would not succeed and that the violence would be brought under control.

"If the idea of Boko Haram is to stop Nigerians from worshipping God, they will not succeed," he said.

"If the idea of Boko Haram is to stop government from providing the dividends of democracy, they will not succeed. ... God willing and with our commitment, the excesses of Boko Haram and other criminal organizations will be brought to a reasonable control."

This is heart breaking!