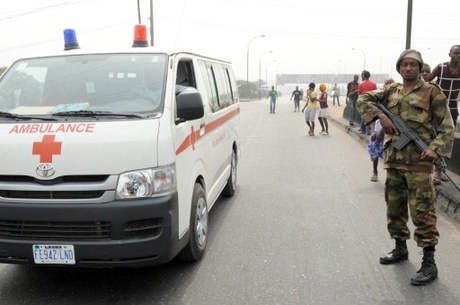 Nigerian troops clashed with militants from the Islamist group Boko Haram in the northeastern city of Maiduguri Tuesday, in an operation that left one soldier and 13 insurgents dead, the army said.

"At about 1600 hours (1500 GMT) today, troops of the Joint Task Force Operation Restore Order had an encounter with Boko Haram terrorists at Bulabulin and Bayan Quarters of Maiduguri," spokesman Sagir Musa said.

"During the encounter the JTF lost one soldier and two were wounded. Thirteen Boko Haram terrorists lost their lives," he added.

According to residents and a relief source, suspected Boko Haram attackers slit the throats of 15 Christians last week on the outskirts of Maiduguri, the group's main stronghold.

While Boko Haram's victims have often included Muslims, the group has also specifically targeted Christians, including bombings of churches. There have previously been instances of victims having their throats slit in attacks.

Boko Haram has said it wants to create an Islamic state in the mainly Muslim north of Nigeria but its demands have shifted. It has repeatedly been linked with al-Qaida in the Islamic Maghreb but its goals and hierarchy remain unclear.

The army spokesman said the operation against the Boko Haram cell in Maiduguri was ongoing and added that three assault rifles, one rocket-propelled grenade and large quantities of ammunition had already been recovered.

"Civilians were well protected and have no casualties recorded as a result of the encounter. The operation is ongoing to apprehend the fleeing members of the gang and recover more weapons," Musa said.

Is this news? In Syria over one hundred civilians lose their lives on a daily basis.

In Syria, the Baath ruling party of over 40 yrs has been ruthless with an iron fist in eliminating or car bombing anyone who opposed that regime. To that for every action there is an equal and opposite reaction, what I do not get in Nigeria is why the innocent citizens are having their throat slit? If I were the Nigerian army commander I would hang publicly every Boko Haram being caught to teach his mates a lesson.

Wonder if any Boko Saudi Haram members are in Syria.