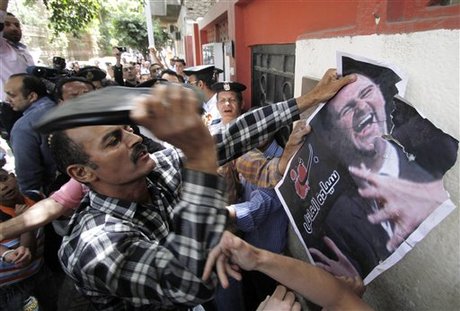 Syria denounced Thursday U.S. sanctions imposed on President Bashar al-Assad and top aides, saying they were part of long-time efforts by Washington to impose its will in the region to Israel's benefit.

And an Al-Jazeera journalist jailed in Syria for three days before being sent to Iran spoke on the Qatari news channel of "savage beatings" of prisoners by Syrian security agents who behaved like "thugs."

"The U.S. measures are part of a series of sanctions imposed by successive U.S. administrations against the Syrian people as part of a regional scheme, aimed primarily at serving Israel's interests," the official SANA news agency said.

It said "any aggression against Syria is akin to U.S. support for Israeli aggressions against Syria and the Arabs," in reference to the country's neighbor, with which it is still technically at war.

Sanctions "have not and will not" affect decisions taken by the Syrian government or its struggle against U.S. hegemony, it added.

In slapping the sanctions on Wednesday, the United States told Assad to lead a transition toward democracy or step down.

For two months, pro-democracy protests have challenged the regime, which according to rights activists has retaliated with deadly force, sweeping arrests and torture.

The Syrian Revolution for 2011, a motor behind anti-regime protests, called for fresh Friday rallies across the country, including the Kurdish towns of the north, labeling the day "Friday of Freedom, Azadi," or liberty in Kurdish.

Adding to claims of torture was Al-Jazeera journalist Dorothy Parvaz, who arrived back in Qatar on Wednesday after having been held in a Syrian prison where, she said, she heard the cries of people being tortured.

"I was in a Syrian detention center for three days, two nights, and what I heard were just savage beatings," Parvaz said Thursday.

"At a certain point you want to cover your ears -- it seemed endless, mid-morning to late at night. At random times you would hear beatings and screams and cries," she said.

More than 850 people are believed to have been killed and another 8,000 arrested since the protests began, according to rights groups and the United Nations.

In imposing the sanctions, the U.S. administration stopped short of saying Assad had lost his legitimacy to rule, a formula Washington has applied to Libyan leader Moammar Gadhafi, whose forces are fighting an armed rebellion.

"We are saying that we oppose his behavior and that he needs to stop his policies of repression and mass arrests and begin a political transition that ensures fair representation and democratic rights for Syrians," said the executive order issued by President Barack Obama.

"It is up to Assad to lead a political transition or to leave," it added.

The sanctions allow the U.S. to freeze any assets owned in the United States by Assad and his top aides and ban any individuals or U.S. companies from dealing with them.

It was unclear what assets would be blocked.

Also named were Ali Mamlouk, director of Syria's Intelligence Directorate, and Atif Najib, the ex-head of intelligence in Daraa province, epicenter of the political violence.

The European Union, which has imposed sanctions on members of Assad's inner circle, has said it is also contemplating sanctions against the president.

Western powers initially were hesitant to criticize Assad's regime for its brutal crackdown against protesters but have come under increasing pressure to react as the death toll mounts.

U.N. chief Ban Ki-moon told Agence France Presse Wednesday he had been urging Assad to carry out reforms before it is too late.

"I have been urging President Assad to engage in dialogue and before it is too late, try to take bold and decisive measures to meet the expectations of people," he said.

"What I have been troubled by in the last several months is that leaders in the region have come out always too late, too little," Ban added.

The Assad regime has blamed the unrest on "armed terrorist gangs" backed by Islamists and foreign agitators, but rights activists say the repression has been directed at unarmed demonstrators.