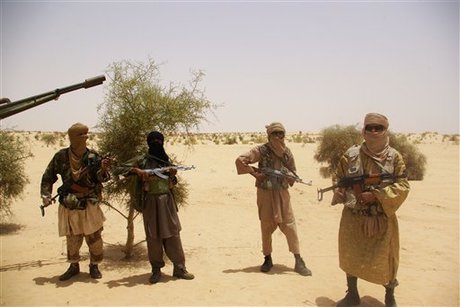 One of the Islamist groups controlling north Mali said in its political program handed to regional mediators that it wants autonomy for the north and the rule of sharia law, according to the document seen Friday.

Ansar Dine, or "Defenders of the Faith", handed the text to Burkina Faso President Blaise Compaore, the top mediator in the Mali crisis, on Tuesday.

It says Ansar Dine has for the moment renounced independence for the north.

But it said that "the strict observance of Islamic law on all the territory of Azawad (northern Mali) is a non-negotiable imperative".

Ansar Dine and another armed group in the north, the Azawad National Liberation Movement (MNLA) are both homegrown movements seen as more moderate than their sometime allies in the vast desert north, the jihadist groups the Movement for Oneness and Jihad in West Africa and al-Qaida in the Islamic Maghreb.

A source close to Compaore said Friday that a second round of talks between Ansar Dine, the MNLA and the Mali government would be held in the Burkina capital next Thursday.

The Islamist groups seized northern Mali in the wake of a March coup in the capital Bamako, and have since imposed a brutal form of sharia, or Islamic law.

Their occupation of the Texas-sized territory has raised fears they could use the north as a base to launch attacks on the region and Europe.

Ansar Dine said Thursday that it had revoked a pledge to end hostilities, accusing the government of giving nothing in return.

African nations have 3,300 troops on standby for a mission to reclaim northern Mali.

The U.N. Security Council on December 20 approved the deployment of an international force, but in stages and without a precise timetable.

The council also insisted on the need for dialogue with armed groups that reject terrorism and the partition of the country.