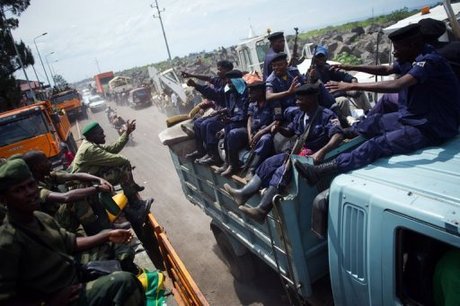 "The two delegations are here finally and we are hoping for a (face-to-face) session tomorrow (Sunday)," said Ugandan defense ministry spokesman Paddy Ankunda.

The rebels, army mutineers largely from the ethnic Tutsi community, staged a lightning advance in November through the DR Congo's mineral-rich and chronically unstable east, raising fears of a widespread conflict.

Uganda is hosting the talks despite accusations that it -- alongside Rwanda -- has backed the fighters, claims which both countries have strongly denied.

Although the M23 rebels were persuaded to withdraw from the key eastern city of Goma after a 12-day occupation, they still control large areas of territory just outside the strategic mining hub.

Almost two weeks of talks in December ended without even an agreement on the agenda for the negotiations, with the rebels issuing a raft of demands, including a call for major political reform for the war-weary region.

The talks, which were due to restart on Friday, are the latest in several bids to end a long-running conflict that has forced hundreds of thousands of people in eastern DR Congo from their homes.

DR Congo's east, which borders Rwanda and Uganda, was the cradle of back-to-back wars that drew in much of the region from 1996 to 2003. They were fought largely over its vast wealth of gold, coltan and cassiterite, key components in electronic goods.