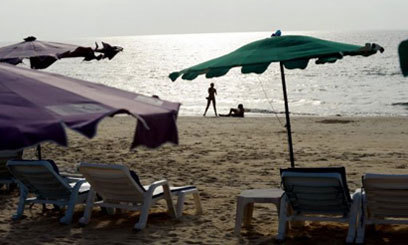 Police were carrying out forensic tests Monday after a young girl found what is believed to be a human head washed up on an Australian beach in a plastic bag.

The gruesome discovery was made at Porpoise Bay on Sunday by the girl, who was holidaying on Rottnest Island off Perth in Western Australia with her family.

"We believe it to be the remains of a human head," Inspector Denise Grant said, the West Australian newspaper reported.

"However, we are yet to confirm this. We can't confirm it until the forensic pathologists have finished their examination."

Police would not confirm what the remains were held in but reports said it was "double bagged".

Authorities have blocked off the southern side of Rottnest Island -- a popular tourist spot a short ferry ride from Perth -- to carry out further testing.

Police said the remains were thought to have been in the water for some time.

"This item which is possibly human remains is yet to be examined today by a forensic pathologist," police spokesman Sergeant Gerry Cassidy told the ABC.

"At this stage the area where it was found is a protective forensic area and access to that immediate area for visitors is closed."