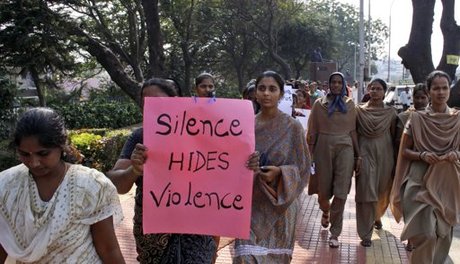 Five men appeared in court for the first time on Monday to face charges over the murder and gang-rape of a 23-year-old student in New Delhi amid chaotic scenes that forced the hearing behind closed doors.

Prosecutor Rajiv Mohan told AFP the men had been appointed a defense lawyer, but declined to comment on reports that two of the defendants have reportedly offered to cooperate in return for more lenient sentences.

"The five have been provided with one counsel from the legal aid services," he told AFP following the hearing in the Saket district court complex in the south of the Indian capital.

The suspects, residents of New Delhi slums aged from 19 to 35, were brought to the court complex from the capital's high-security Tihar jail under high security due to fears for their safety after three weeks of protests.

"A chargesheet has been provided to the accused and the next hearing will be on January 10," magistrate Namrita Aggarwal, who is expected to transfer the case for trial in a higher fast-track court, told reporters.

She earlier ordered proceedings to take place behind closed doors after journalists and lawyers packed the tiny courtroom which had chairs for about 30 people but was struggling to accommodate about 150.

Some lawyers staged protests while others argued over whether the suspects had a right to defense counsels after two Supreme Court advocates stepped forward offering to defend the men in order to ensure a fair trial.

"It has become completely impossible for the courtroom proceedings to proceed," Aggarwal said in an order that forced all journalists and lawyers not connected with the case to vacate the stuffy room.

The accused, who could face the death penalty if convicted, face a string of charges including rape, murder and kidnap. A sixth accused, who is 17, is to be tried in a separate court for juveniles.

The next hearing has been set for Thursday and will also take place behind closed doors.

Though gang-rapes are commonplace in India, the case has touched a nerve, leading to three weeks of sweeping introspection on India's attitudes to women, its often insensitive police force and dysfunctional justice system.

It often takes years to bring a case to court, but the fast-tracked legal proceedings are getting under way barely a week after the medical student died of her injuries in a Singapore hospital.

India's chief justice has ordered High Courts in each Indian state to set up new fast-track courts for sex crimes, saying the New Delhi case had "shaken the conscience of the nation", according to a letter seen by AFP on Monday.

The victim had been out to watch a film with her boyfriend and was on her way home when she was lured onto a bus where the gang are accused of repeatedly raping and violating her with an iron bar, causing horrific internal damage.

A court source, speaking to AFP on condition of anonymity, said that two of the men had offered to become witnesses in an apparent bid to avoid the death penalty, which is rarely carried out in India.

Prosecutor Mohan said he was unable to discuss their plans, but said no petition was "on the record". It remains unclear if the prosecution would want to accept them in any case.

Outlining their evidence before the same court in Saket on Saturday, prosecutors said there was DNA evidence to tie the defendants to the crime scene, as well as crucial testimony from the boyfriend who witnessed the assault.

"The blood of the victim tallied with the stains found on the clothes of the accused," Mohan said on Saturday.

There have been widespread calls for the attackers to be hanged, including from the victim's family.

Police pledged "maximum security" during the hearing at the court on Monday amid fears for the defendants' safety. A man was arrested last week as he allegedly tried to plant a crude bomb near the home of one of the men.