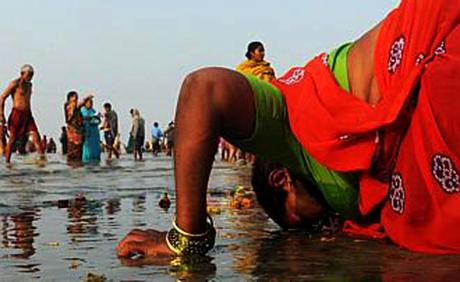 More than a million Muslims gathered on the banks of a river in Bangladesh on Friday to pray and listen to religious scholars at the start of the world's second largest annual Islamic congregation.

The streets of Dhaka were largely deserted as devotees flocked to the River Turag at Tongi, some 40 kilometers (25 miles) north of the capital, where the Biswa Ijtema (World Muslim Congregation) is being held over the next three days.

Nurul Islam, one of the chief organizers, said canopies stretching for more than a kilometer, erected on open ground on the banks of the river, were already filled and tens of thousands more were reaching the site every hour.

"There are more than a million devotees already here, but we hope, like last year, that the number will pass the two million mark at the final prayers on Sunday," he said.

Special trains and ferries have been arranged to transport pilgrims to the event, while army engineers have set up dozens of makeshift bridges and water tanks.

The devotees will either sleep in the marquees or brave the chilly temperatures outside -- Bangladesh is currently experiencing its coldest winter since independence from Pakistan in 1971.

"Around 30,000 foreigners from more than 100 countries also joined the congregation this year," Islam said.

Launched by Tablig Jamaat, a non-political group that urges people to follow the tenets of Islam in their daily lives, the gathering at Tongi was first held in 1964.

It is the second largest annual gathering of Muslims in the world, after the Hajj pilgrimage in Saudi Arabia.

Bangladesh is the world's third-largest Muslim-majority nation, with Muslims making up nearly 90 percent of its 152 million population.

The second phase of the festival, which also lasts three days, will begin on January 18.

why is it that the article included a Hindu Festive picture at the beginning ?
Don't say that your editorial had a lack of muslims praying this is blatantly attacking or aggravating hatred
Please i kindly request you to change the picture.