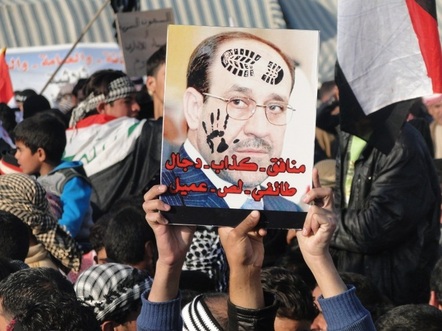 Thousands of Sunni Muslims took to the streets of Baghdad and other parts of Iraq on Friday to decry the alleged targeting of their minority, in rallies hardening opposition to the country's Shiite leader.

The protests have worsened a political crisis, pitting Prime Minister Nuri al-Maliki against his erstwhile government partners, with the premier facing accusations of authoritarianism and sectarianism ahead of key provincial polls.

Counter-demonstrations were held in predominantly Shiite areas of southern Iraq calling for authorities to resist demands to reform anti-terror laws or consider a wide-ranging prisoner release, both key demands in majority-Sunni areas.

Anti-government protests were held in Baghdad's mostly-Sunni districts of Adhamiyah and Ghazaliyah, as well as the cities of Ramadi, Samarra, Mosul and Tikrit, AFP journalists said.

In Ghazaliyah, hundreds of protesters rallied after Friday prayers at the Umm al-Qura mosque, holding up banners calling for the repeal of anti-terror laws, the release of women prisoners, and improved human rights in jails.

"These sounds do not represent only one community," Ahmed Abdulghafur al-Samarraie, head of the foundation that manages Sunni mosques across Iraq, said in a speech at the rally, referring to the shouts of protesters.

"No, these are the sounds of Iraqis from all over Iraq, all shouting 'No to suffering, no to the absence of services, no to injustice, no to foreign agendas, no to conflict, no to the return of the Baath, Qaida or militias, no to torturing until death.'"

Hundreds of protesters also gathered at Adhamiyah's Abu Hanifa mosque, despite a heavy security presence and soldiers barring would-be demonstrators from outside the district from taking part, an AFP journalist said.

"We do not have any demands in our protests -- we are just here for our rights," said a 62-year-old man who gave his name as Abu Fares. "The government should provide a good quality of life for people."

Protesters also blocked off the highway linking Iraq to Syria and Jordan for a 20th day in western Anbar province, while in the northern city of Kirkuk, hundreds of protesters waved banners and raised flags, both Iraq's new flag, and that of now-executed dictator Saddam Hussein.

Maliki has threatened to direct security forces to intervene in the protests, which were sparked by the December 20 arrest of at least nine guards of Sunni Finance Minister Rafa al-Essawi.

Essawi is a leading member of the secular Sunni-backed Iraqiya bloc that, while a member of Maliki's unity government, has called for him to resign.

In the holy Shiite city of Najaf, meanwhile, thousands of demonstrators called for the government to resist calls to reform anti-terror and De-Baathification laws.

Friday's protests come with barely three months to go before provincial elections in April, a key barometer of support for Maliki and his opponents ahead of national polls next year.