Algeria Says 'Terrorists Came from Mali', Many Hostages Killed 'with Bullet to Head' 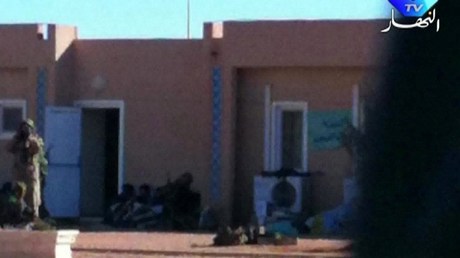 Algiers said on Monday that 37 foreigners of eight different nationalities, as well as an Algerian, were killed by hostage-takers in a well-planned attack on a remote gas plant.

Prime Minister Abdelmalek Sellal said five other foreigners were still missing and that several of the hostages had been executed "with a bullet to the head" as the four-day crisis ended in a bloodbath on Saturday.

Most of the 32 militants who took hundreds of people hostage at the In Amenas gas complex in the Sahara on Wednesday had entered the country from neighboring Mali, Sellal told a news conference in Algiers.

The premier gave the final grim figures after Algeria had warned other nations to prepare for a higher body count, amid fears as many as 50 captives may have died in the world's deadliest hostage crisis in almost a decade.

"Thirty-seven foreigners of eight different nationalities," were killed during the siege, Sellal told reporters, adding an Algerian was also killed, giving an overall toll of 38.

He said the group's leader was Mohamed el-Amine Bencheneb, an Algerian militant known to the country's security services, and was killed during the army's assault.

A total of 29 hostage-takers were killed and three captured. As well as the three Algerians among them, the kidnappers comprised six foreign nationalities, namely Canadian, Egyptian, Tunisian, Malian, Nigerien and Mauritanian.

Governments have been scrambling to track down missing citizens as more details emerged after the final showdown on Saturday between special forces and extremists who had taken the hostages, demanding an end to French military intervention in Mali.

Survivors' photos seen by Agence France Presse showed bodies riddled with bullets, some with their heads half blown away by the impact of the gunfire.

"They were brutally executed," said an Algerian who identified himself as Brahim, after escaping the ordeal, referring to Japanese victims gunned down by the hostage-takers.

Japan's Prime Minister Shinzo Abe said seven Japanese people were known to have been killed in the hostage crisis, the first confirmation from Tokyo that any of its nationals had died.

One Japanese survivor was quoted in the Daily Yomiuri newspaper as telling colleagues how the gunmen had dragged him from his barricaded room, handcuffed him and executed two hostages standing nearby.

The Philippine government said six Filipino hostages were among the dead, killed "mostly by gunshot wounds and the effects of the explosions."

As more harrowing accounts emerged of the siege, a Filipino survivor described how the militants used foreign hostages as human shields to stop Algerian troops aboard helicopters from strafing them with gunfire.

Joseph Balmaceda told reporters in Manila he was the only survivor out of nine hostages in a van that blew up on Thursday, apparently from C-4 explosives the militants had rigged to the vehicle.

"I was the only one who survived because I was sandwiched between two spare tires. That is why I am still here and can talk to you," said the visibly distressed father of four.

The alleged mastermind of the hostage-taking, Mokhtar Belmokhtar, said in a video posted online that it was carried out by 40 fighters from the Muslim world and "European countries".

His al-Qaida-linked group "Signatories in Blood" threatened to stage attacks on nations involved in the French-led operation to evict Islamists from Algeria's neighbor Mali, and said it had been open to negotiations.

"But the Algerian army did not respond... preferring to stage an attack which led to the elimination of the hostages," it said in a message published by the Mauritanian news agency ANI.

Most hostages were freed on Thursday in the first Algerian rescue operation, which was initially viewed by foreign governments as hasty, before the focus of public condemnation turned on the jihadists.

The In Amenas plant is run by Britain's BP, Norway's Statoil and Sonatrach of Algeria.

An Algerian employee of BP who identified himself as Abdelkader said he was at a security post with colleagues on Wednesday morning when he saw a jeep with seven people inside smash through the barrier and screech to a halt.

One of the militants got out of the vehicle, demanded their mobile phones and ordered them not to move, before disabling the security cameras.

"He said: 'You are Algerians and Muslims, you have nothing to fear. We're looking for Christians, who kill our brothers in Mali and Afghanistan and plunder our resources'."