Eritrea Mutiny Over, 'All Calm' in Capital 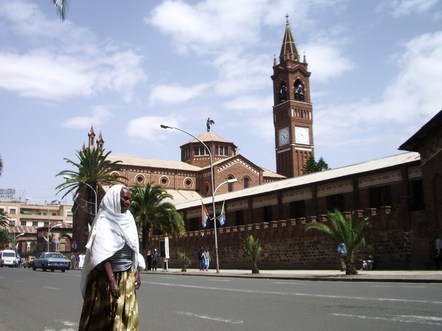 Armed Eritrean mutineers have left the information ministry that they seized on Monday, with the capital Asmara reported to be calm, diplomats and opposition members said Tuesday.

"The situation today is very, very quiet. There is no visible military presence in the city, the tanks have gone," a European diplomat in the city told Agence France Presse.

"The information ministry is back to business as usual," the diplomat added, noting that Asmara was back "to normal", with banks and public buildings open.

Opposition website Awate.com, based in the United States but with close connections inside Eritrea, said that the commander of around 100 rebel soldiers had agreed to leave the ministry, something believed to have happened late Monday.

"The face-off was 'solved' when the government 'accepted his terms'," Awate said, although there were no further details as to what will happen next.

"All is calm today, as it was indeed yesterday," read a message from Yemane Gebremeskel, the director of Eritrean President Issaias Afeworki's office, although officials have otherwise remained tight-lipped over the events.

It was not possible to confirm the reports independently.

Amanuel Ghirmai, an Eritrean journalist in Paris for independent Radio Erena, said the army mutineers stormed the hill-top ministry -- which towers over the capital of the Red Sea state -- early on Monday morning.

They reportedly ordered news readers at the government-run television and radio station -- the only source of media for the authoritarian state -- to read a statement that they would implement the country's constitution enacting democratic principles and stopping arbitrary arrests.

The constitution was suspended during the 1998-2000 border war with Ethiopia.

The statement also reportedly ordered the release of prisoners of conscience.

While the state-run Eri-TV television and radio broadcasts were taken off air Monday, several sources said they had resumed broadcasting by Tuesday.

"Eri-TV, under regime loyalists, has resumed broadcasting live," Awate said. "All Ministry of Information employees have been released."

Multiple sources reported that one of those held inside the information ministry was the daughter of President Issaias, who has ruled the Horn of Africa nation with an iron grip from independence in 1993, following an epic 30-year liberation war from neighboring Ethiopia.

The European diplomat said all information ministry workers had been released, but that there had been "no official information" on the events, nor was there yet any clear sense of who the mutineers were.

Multiple rumors have swirled on social media, with officials dismissing the majority.

"I don't want to dignify nonsense and garbage reports," Eritrea's ambassador to the African Union, Girma Asmerom, told AFP on Tuesday as he refused to comment.

Awate claimed the mutineers were led by an army commander called Saleh Osman, a hero of the 1998-2000 border war, when he refused orders to abandon the key southern port of Assab, defending it and beating back invading Ethiopians.

"The 'uprising' appears to have been a case of Saleh Osman trying to jolt back negotiations for democratization he had been having with the president's office that have stalled," Awate added.

Impoverished Eritrea even falls below North Korea on the Press Freedom Index of the Paris-based media watchdog Reporters Without Borders, ranking last out of 179 countries.

All independent media were shut down after Issaias launched a draconian purge in 2001, while Eritrea expelled the last registered foreign correspondent in 2010.

Opposition parties are banned and those who challenge the regime are jailed without trial, often in the harshest of conditions.

After 15 top officials wrote an open letter in 2001 calling for democratic reforms -- dubbed the Group of 15, or G-15 -- Issaias launched a brutal political purge, jailing 11 and with the others fleeing into exile.

It left Eritrea effectively under the control of the army, usually veterans of the decades-long independence war with Ethiopia, with government ministers mostly sidelined from the seat of real power.

Religious minorities are also persecuted in Eritrea, which is officially split equally between Muslims and Christians.