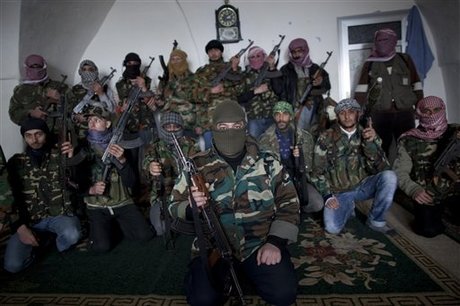 Rebel groups in Syria appeared to have deliberately destroyed or allowed the looting of minority religious sites in the north in November and December 2012, Human Rights Watch said on Wednesday.

"The destruction of religious sites is furthering sectarian fears and compounding the tragedies of the country, with tens of thousands killed," said Sarah Leah Whitson, Middle East director at the New York-based HRW.

"Syria will lose its rich cultural and religious diversity if armed groups do not respect places of worship. Leaders on both sides should send a message that those who attack these sites will be held accountable," she said.

In the Idlib village of Zarzour, researchers found evidence of deliberate damage to the local husseiniya, a Shia place of worship, caused by opposition fighters after they took control.

Its windows were broken, prayer stones littered on the floor, walls charred from flames, and what appeared to be the remnants of a burned prayer rug lay on the floor.

Footage posted on Internet site YouTube on December 12 showed rebels celebrating their victory in the town as the husseiniya burns in the background.

A fighter announces the "destruction of the dens of the Shias and the Rafida," a derogatory term used to refer to the minority sect, from which the Alawite religion of President Bashar Assad originates.

Residents said that the army had been using the husseiniya as a barracks. While troops withdrew after congregants complained, a sniper remained stationed on the roof and was there when opposition forces arrived.

HRW condemned the government's use of the husseiniya for military purposes, but said that did not justify intentional damage by the rebels.

In the Christian villages of Ghasaniyeh and Jdeideh in Latakia, residents said that gunmen operating "in the name of the opposition" broke into and stole from churches after rebels took control.

One resident said, however, that the townspeople had positive relations with many opposition fighters, and the rebels said they were not responsible for the attack.

Residents of Zarzour, a predominantly Sunni village, said their Shia neighbors fled fearing retaliation for supporting the government, though people in the Christian villages of Ghasaniyeh and Jdeideh said many left because of dire humanitarian conditions and fear of regime air strikes.

Syrian churches and mosques are symbols of the diverse fabric of the religious communities in a country where the brutal conflict has left more than 60,000 people killed in 22 months, according to United Nations figures.

While looting may have been motivated solely by financial reasons, HRW emphasized that rebels must be vigilant in safeguarding minority places of worship in areas under their control to alleviate fears of sectarian reprisals.

"The opposition in Syria should back up its claims that it will uphold minority rights by protecting places of worship, and more generally ensuring that gunmen acting in its name respect civilians and civilian properties," Whitson said.

"shia extremists who seek to eradicate the Christian scriptures by burning them are met by determined believers who will simply print and disseminate more. Last year, Elam Ministries distributed 100,000 New Testaments and 100,000 Bibles in Iran. " Bibles were confiscated and burnt by the Iranian authorities. He said that in May 2010 hundreds of Bibles were intercepted and burnt on the Iraqi border, in October 2010 over three hundred Bibles were taken and burnt on the Turkish border and in February 2011 three hundred Bibles were seized in Salmas and there was a public burning."

in iran, the main supporter of the baath regime, praised as a democracy by brainwashed sheep, there is also religious intolerance against christians...and religious minorities!

where are all the smart alecs who defend the rebels
hello out there where are you?
say something about this