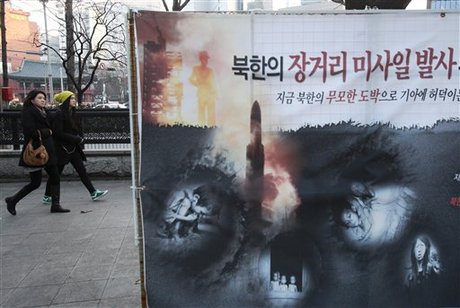 North Korea on Friday threatened "physical counter-measures" against rival South Korea -- the latest in a series of bellicose warnings sparked by a tightening of U.N. sanctions against Pyongyang.

"If the South Korean puppet regime of traitors directly participates in the so-called U.N. 'sanctions,' strong physical countermeasures would be taken," the North's Committee for Peaceful Reunification of Fatherland said.

The warning, carried by the official Korean Central News Agency, came a day after North Korea's top military body threatened to conduct a third nuclear test and boost its ability to strike the United States.

The latest warning re-focused Pyongyang's anger from Washington to Seoul.

"Sanctions amount to a declaration of war against us," said the committee, which is the prime state body responsible for inter-Korean dialogue and exchange.

"As long as the South Korean puppet traitors' regime continues with its anti-DPRK (North Korea) hostile policy, we will never sit down with them," it said.

The current upsurge in tensions has its roots in Pyonyang's defiant decision to push ahead with a long-range rocket launch on December 12 -- insisting it was a peaceful mission to place a satellite in orbit.

The rest of the world saw it as a banned ballistic missile test and on Tuesday the U.N. Security Council unanimously adopted a resolution that expanded sanctions imposed on North Korea after its nuclear tests in 2006 and 2009.

The United States, supported by Japan and South Korea, spearheaded the U.N. resolution.

Pyongyang reacted furiously, vowing to boost its nuclear arsenal and to conduct a third nuclear test and even longer-range rocket launches in an "all-out action" against its "sworn U.S. enemy.”

The North's reaction poses an early challenge to both U.S. President Barack Obama at the start of his second term, and to South Korean president-elect Park Geun-Hye, who takes office in one month's time.

Park has promised to push for further engagement with North Korea after a virtual five-year freeze in North-South relations during the term of outgoing President Lee Myung-Bak.

But the hawks in her ruling conservative party will leave Park little room for maneuver in the current climate, especially if Pyongyang follows through with a third nuclear test.

In Washington on Thursday, White House spokesman Jay Carney criticized the North Korean threat as "needlessly provocative" and stressed that any test would be a "significant violation" of U.N. Security Council resolutions.