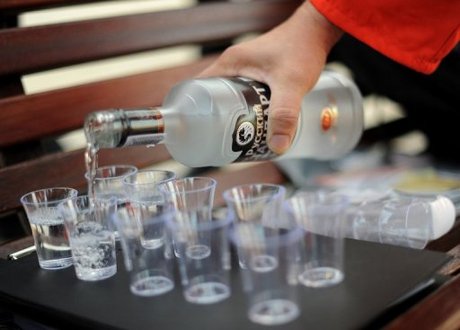 A license to drive drunk? Some small-town politicians think it's just the tonic for rural Ireland.

Councilmen in Kerry, southwest Ireland, passed a motion this week asking the government to create a permit that would allow isolated farmers the ability to drink a few pints and then return home in their car, or on their tractor, without fear of being busted.

Its backers say the measure is needed to combat an epidemic of boredom and depression on farms ever since Ireland imposed tough new blood-alcohol limits on drivers in 2011.

But Justice Minister Alan Shatter shot down the proposal during a speech in parliament Thursday as "grossly irresponsible."

"There is no question of this government, or indeed I don't believe any future government, facilitating individuals drinking in excess of the blood alcohol limits," Shatter told lawmakers.

A generation ago, drunken driving was commonplace in Ireland and even the smallest villages or forlorn crossroads would feature a pub. But in this century the country has steadily improved road safety standards, introducing mandatory driving tests, blood and breath tests and above all a penalty-points system that removes licenses from dangerous drivers, particularly drunks.

The effort has slashed road-related deaths from more than 400 annually in the 1990s to just 162 last year, a modern low in this country of 4.6 million.

Kerry pub owners say their business has plummeted right along with that nationwide carnage — yet deny any connection between the two trends. They describe the often narrow, lightly trafficked roads near their businesses as safe for people to navigate even after three pints (57 ounces) of beer.

Danny Healy-Rae, who owns a pub and comes from Kerry's most famous and flamboyant political family, says farmers should be allowed to drive tipsy on their tractors because they don't go fast enough to kill anyone. He said those drinking two to three pints at a pub should be issued a permit allowing them to drive home so long as they stay below 30 mph (50 kph).

He was one of five Kerry County Council members who voted for the motion Monday night. Three others voted against, seven abstained and 12 council members didn't show up. Their decision has no legal standing because the national government, not councils, sets policy on road safety.

Healy-Rae — who like his politician father is nationally famous for wearing a cap everywhere and talking in rapid-fire local dialect easy to parody but hard to understand — said pub-loving farmers "are living in isolated rural areas where there's no public transport of any kind. They end up at home looking at the four walls, night in and night out, because they don't want to take the risk of losing their license."

He said the older generation provided the sociological fuel to Ireland's tradition of pub-based music and "craic," Irish slang for entertaining conversation.

Yet even in Kerry, many have dismissed the idea as both dangerous to public safety and impossible to enforce. And alcohol-abuse campaigners say Healy-Rae's logic is twisted, since alcohol is a depressant and hardly a cure for the blues.

"The link between alcohol use and suicide has been well established and drinking alcohol will exacerbate, not alleviate, any mental health difficulties that a person may be struggling with, such as depression or anxiety," said Conor Cullen, spokesman for a pressure group called Alcohol Action Ireland.

The government emphasized that Kerry's council motion was already a dead letter.

"While rural isolation is a real problem," said Transport Minister Leo Varadkar, "the solution to it is not to hand out drink-driving permits."