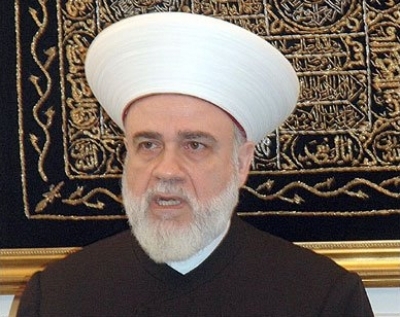 Grand Mufti Mohammed Rashid Qabbani issued a fatwa on Monday against moves to legalize civil marriages inside the country.

The religious edict came a day after President Michel Suleiman tweeted that he would remain steadfast in supporting such unions, while Prime Minister Najib Miqati wrote on his Twitter account that a consensus was required to address the issue.

Qabbani issued the fatwa branding as an apostate any Muslim politician who approves civil marriage legislation.

"Any Muslim with legal or executive authority in Lebanon who supports the legalization of civil marriage is an apostate and outside the religion of Islam," he said on the website of Dar al-Fatwa.

"There are predators lurking among us, trying to sow the bacteria of civil marriage in Lebanon, but they should know that the religious scholars will not hesitate to do their duty" and prevent the passage of such a bill.

Qabbani said offenders would not be eligible to be buried in a Muslim cemetery.

Suleiman had tweeted that he would "respond to the evolution and aspirations of the people and prepare the appropriate laws for the issue of civil marriage."

"There are authorities opposed to civil marriage, but this will not sway my convictions or my quest to put the train on the right track," he said in another tweet.

But after meeting Suleiman on Sunday, Prime Minister Najib Miqati tweeted in Arabic "the current circumstances do not allow us to address new controversial topics that create divisions."

He added in English: "I believe that the civil marriage issue cannot be dealt with from a top-down approach."

The campaign for civil marriage in Lebanon has gained momentum with a daring initiative to create new jurisprudence.

Kholoud Sukkarieh and Nidal Darwish announced earlier this month they had wed as a secular couple by having their religious sects legally struck from their family registers under an article dating from the 1936 French mandate.

As a "Sunni", I state that Mohammed Rashid Qabbani does not represent me and does not represent Islam and should be impeached. Indeed, he should be put on trial for incitement of hatred and incitement to murder as some of the nutcases claim that death is the punishment for being a murtad or apostate. Indeed he is not only PREDATOR but is threatening the lives of people.

Big thumb up for you, brother.

you are not muslim andre so do not discuss muslim's shara2e3

Amen, nice to hear it from a Muslim. Well said.

coming from the father of a thief who has been plundering awkaf money....
this is not only the stance of this mufti, it is also the stance of all other men of the cloth. not long ago rahi (before becoming a patriarch, had a similar stance openly against civil marriage.
this affects their income.
but as Lebanese, if we are to get out of the sectarian thinking in this country, civil marriage is surely a step in that direction.

Yes, @FlameThrower, if the Pope says he is against civil marriage it DOES make him sectarian. The definition of sectarian as an adjective:

if you are not muslim you do not have the right to discuss muslim's fatwa. i would not discuss any decision taken by the pope or the Raii. If you are muslim, then go learn about your religion first

I agree with you rafehh...people like Qabbani are keeping us in the dark ages...RESIGN RESIGN RESIGN

Shame on you Qabbani.

Shame on this guy! He can state his personal opinion but he can not impose it on all Lebanese let along his own people

you are not muslim Marc so do not discuss a fatwa. do you accept if a muslim discusses a Pope opinion?

Can somebody please explain to me why people are in favor of Civil Marriage? I am not trying to be smart, I'm serious when I ask this question. A Muslim gets married and the wedding ceremony is a covenant between man and women, likewise a Christian/Jew/etc. What is accomplished by removing this and being more like "Western Society" and their complete disregard to morals/ethics/charity etc."

If a Christian man marries a Muslim woman in the Islamic law the kids are Muslim. While typically the children should follow their father. Civil marriage makes sure that Christian/ or Muslim continuation is safe guarded by giving the children the choice. Another example when a Christian woman marries a Muslim she is granted the choice to convert however if she doesn't she can't claim any inheritance and her kids are automatically Muslim in any case does that sound balanced to you ?

If two ppl from dif sects, one of them has to change their religion!...

Besides that, it's time we integrate our society.

Also, there are more immoral, unethical and other atrocities committed by "religious" folks than otherwise. How would you classify the attack on the WTC by Bin Laden, or the fighting of Hizbollah partisans in Syria and one can go on and on.

To quote Vladimir Lenin (am not crazy about Bolchevik or communist philosophy but this one rings very true): "Religion is the opiate of the masses". We in Lebanon should stop smoking and clear our heads.

Also, some of us just don't want to be associated with any religions, and want to get married in our home country.

chou chatrin bil fatwa! when something does not please them, yella! fatwa! backward mentality and hanging to his privileges that s all!
stupid religions...

fatwas like this can only send us back to the dark ages and should be condemned. civil marriage is a right and should be given to those who want to pursue it.

Clerics are the problem, not the average Lebanese. They shouldn't have access to media.

Qabbani issued the fatwa branding as an apostate any Muslim politician who approves civil marriage legislation.
HE IS PLAYING GOD. He just placed himself above everyone and everything.

which is a sin.... he substitutes himself to God = 7araam.

I just lost all respect for this man.

Mikati is right, "the civil marriage issue cannot be dealt with from a top-down approach.", there should be a referundum and let the lebanese people vote for it.

his kind is the reason lebanon been what it is today ..peoples rights should be above any thing else.we are all humans above anything else and should choose our way of life, only God can judge .

Its like him telling a grown man that Santa Claus will not be bringing him any presents this year..

Thats a bit rich coming from someone who implement sharia law with 3erfa marriage, hipocrate twat.

Shu khas?? :/ ... Rafik harriri put it in the drawer like ten yrs ago to appease some, while accomplishing more than any other. Qabani has issued a religious law against it in 2013! How r u comparing them?

What a utter joke all these religious leaders are. I would hate to see his statement on gay marriage!!! Lol

What i enjoyed the most about this thread is that it is filled with thumbs up. Good job folks.

Threats coming from a man of god. Shameful.

When Hrawi proposed this law, the same Mufti and Hariri senior threw it into the trash bin. History is repeating itself but this time the useless Mikati is throwing it out. What a shame for Lebanon.

Im Happy those religious figures are sensing the fire btw their toes!

Civil mariage is wrong, FATWA, but your son stealing is okay.
all corrupt leaders.

In a confessional system, it is the clergy who are empowered at the expense of the people and their government. At the core of the confessional system is the confessional identity of the individual which is determined at birth and by marriage. If confessional identity becomes irrelevant in marriage, then it becomes irrelevant at the birth of children of that marriage.
Qabbani sees with the civil marriage movement that unwinding of confessionalism in Lebanon and with it, his temporal power as a member of the clergy in Lebanon.
It is the first move toward modernism in Lebanon that the clergy return to matters of God and helping people to do well in the next world, while leaving to the civil leaders matters of state and the well being of the people in this world.

This is incitement of hatred. YOU, dear sir, deserve to go to jail for this.

As usual, religious leaders trying to hold on to power and money by denying this. I won't get married in this country because I refuse to pay off clerics.

Just shows how out of touch with present day Lebanon these clerics are...they live in their own world with no inkling of the dynamics, issues, and concerns of real people. Wish we could just throw rotten eggs and tomatoes at all these selfish hypocrites...

For once I agree with you

The final story in Spirits Rebellious, "Khalil, the Heretic", is of a young peasant man who stands up to a corrupt sheik and church. It's not a subtle story, but it is the one that got him exiled from his country and excommunicated from his church.............. Gibran Khalil Gibranm suffered their wrath 100 years ago, and the same whell is still turning.
The Ottoman empire was shaken by his writings.

Shame on you ya Qabbani...You are worried about the money that you will lose....You are known to be a thief with your Son...I hope no one listens to you...people like you are keeping us in the dark ages...

Who made this guy God?

go to hell gabby with your secular trends