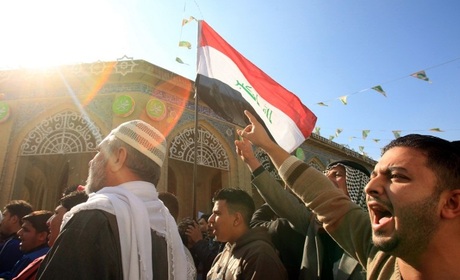 Tens of thousands of Iraqis gathered in Sunni-majority parts the country on Friday in new rallies against Prime Minister Nuri al-Maliki, a week after eight demonstrators were shot dead amid a dire political crisis.

Thousands demonstrated in Fallujah, just west of Baghdad, where the killings took place at the hands of the army, railing against their alleged marginalization at the hands of Iraq's Shiite-led authorities.

"We want the fall of the regime -- no negotiations," proclaimed one banner in the town.

The demonstrations were the latest in a wave of rallies that have continued largely uninterrupted since late December, criticizing the alleged mistreatment of the Sunni community and, more recently, calling for Maliki's downfall.

They are among the myriad problems confronting the premier, who has also faced vocal opposition from many of his erstwhile government partners less than three months before key provincial elections.

"I will continue to protest, even if I am the one one left," said Osama Nayif, one of the Fallujah protesters. The 25-year-old was among 59 people who were wounded in Fallujah last week.

In an apparent revenge attack immediately following the protesters' deaths, two Iraqi soldiers were killed and three others kidnapped as the army withdrew from the city and handed over security responsibilities to the police.

In Ramadi, capital of Anbar province which surrounds Fallujah, many protesters held up flags dating back to the rule of now-executed dictator Saddam Hussein.

"I call for the Arab League and the United Nations to protect the demonstrators and to pressure the Iraqi government to listen to the people's demands," said one of them, Abdulrahman al-Ghawi.

And in Adhamiyah, a mostly-Sunni neighborhood in northern Baghdad, several hundred demonstrators held their latest weekly protest under heavy security measures at the Abu Hanifa mosque, calling for the release of prisoners they claim are being wrongfully held.

The latest rallies come a day after al-Qaida's front group in Iraq released an audio message calling for the country's Sunnis to take up arms against the Shiite-led government.

"You have two options," a voice in the audio message, purportedly that of Islamic State of Iraq spokesman Abu Mohammed al-Adnani, said. "You can kneel to them (the government), and this is impossible, or carry weapons and you will be the superior."

Iraqi authorities have taken several steps in a bid to curb the protests. They claim to have released nearly 900 prisoners, and have pledged to raise the salaries of anti-Qaida militiamen.

At the same time, a top minister has publicly apologized for holding detainees without charge for prolonged periods.