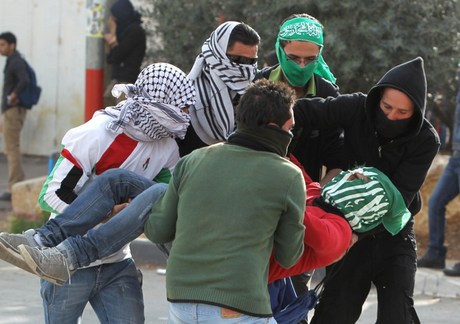 "Two Palestinians, aged 16 and 17, were hit in the legs by Israeli army gunfire east of Jabaliya as they approached a security barrier" between Israel and the Gaza Strip, health ministry spokesman Ashraf al-Qudra told Agence France Presse.

An army spokesman said the two youths had strayed "very near" the barrier.

"Several Palestinians came up to the security barrier. The soldiers used tear gas and fired in the air to try to stop them, but without success. They then fired at their legs," he said.

Four Palestinians in Gaza have been killed by Israeli forces since a November 21 ceasefire between the Jewish state and the Islamist movement Hamas, which rules the coastal territory, ended a bloody eight-day conflict.

The Egypt-brokered ceasefire stipulates the Israeli army grant Palestinian farmers access to arable land in a buffer zone along the border and allow them to approach up to 100 meters (yards) from the security barrier.

Israel says its soldiers open fire on Palestinians who cross that mark.