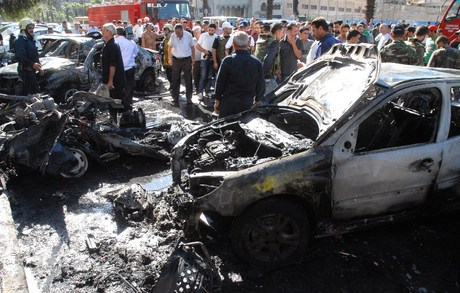 A suicide car bombing at a Syrian military intelligence headquarters in Damascus province killed 53 people, a watchdog said on Friday.

The January 24 attack, reported for the first time by the Britain-based Syrian Observatory for Human Rights, was carried out by the jihadist rebel group the al-Nusra Front, the watchdog said.

The blast targeting military intelligence in the Sahsah area of the town of Quneitra killed 53 intelligence workers including six officers and wounded 90, the Observatory said, citing medical sources.

Several bodies of prisoners being held in the building were found, but the cause of their deaths was unclear.

The Observatory relies on a network of medical sources and activists on the ground for its information.

A simultaneous explosion at a checkpoint elsewhere killed four soldiers of President Bashar Assad's army and sparked clashes in which a number of al-Nusra Front fighters were killed, it said.

The United States has placed al-Nusra, which it says is closely linked with al-Qaida's Iraq branch but contains mostly Syrian fighters, on its list of terrorist organizations.

The group has claimed the majority of suicide bombings in Syria's 22-month uprising against Assad, which has transformed into a full-scale civil war and killed more than 60,000 people according to U.N. figures.

Good job. I think Bashar should learn from them how to kill. In a second 53 people killed without any risk or much effort.

US/Israeli intelligence workers have trained these local operatives how to direct fire at random into crowds and only hit evil people.

the damned die hard. front for the freedom of lebanon from foreners is about to strike deep inside lubnan.

Are you sure they are intelligent officers? Not innocent people who got killed. Anyway keep cheering, maybe you will get your dream car packed one day.

Of course the regime focuses strictly on military targets such as bakeries and gas stations.

funny how you don't bring up the ASSad's air force bombing bread lines--the more hypercritical you are, the less credible your words.

"The true hypocrite is the one who ceases to perceive his deception, the one who lies with sincerity." ~André Gide