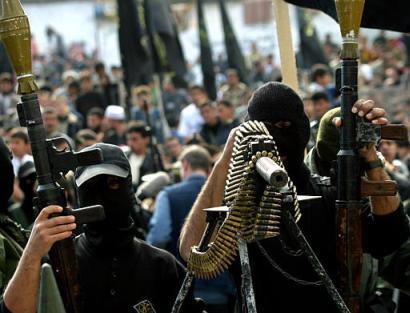 The Shin Bet domestic spy agency said on Sunday that it had arrested members of a cell belonging to the radical Palestinian Islamic Jihad group who had plotted to kidnap Israelis.

"A bid by Islamic Jihad to kidnap a soldier or an Israeli citizen was foiled by Shin Bet special forces and police," the agency said in a statement.

"Members of the cell were arrested on January 1... east of Kfar Saba" northeast of Tel Aviv, it added.

Two members of the cell are from the West Bank town of Jenin and a third is an Arab Israeli resident of Kalansua in central Israel, Shin Bet said.

Eight other suspects were arrested in Jenin as part of the investigation, it added.

Shin Bet said the cell had failed in an attempt at the end of December to kidnap Israelis from bus and train stations.

Ropes, adhesive tape, a Japanese knife, a fake pistol and mask were found in a car belonging to the group, it added.

All the suspects were indicted by a court in Lod.

Looking at the photo above of those animals is shocking. Rather I prefer Israel rule than having those animals to rule Palestine.

One knife to the whole group, and one fake pistol. Big operation was busted.

forgot the tape jca or jackoff whatever ur callsign. shin bet were probably just framing some school kids coming home from school. not as though every freaking palestinian won't sell out his brother. shin bet aren't really effective anyway. they never catch anyone.