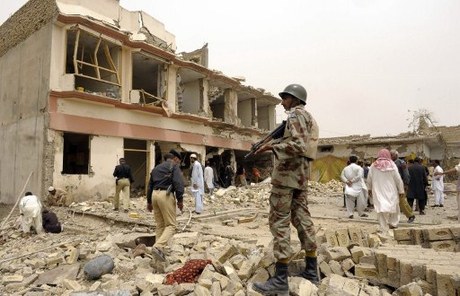 Ten people were killed and another 26 wounded when a bomb exploded near a shop selling DVDs and mobile phones in Pakistan's northwestern tribal belt on Friday, officials said.

The attack happened in Kalaya, the main town of Orakzai district where the military has been battling Taliban and al-Qaida-linked militants for years.

The bomb targeted people from the pro-government Feroz Khel tribe, who have shops in the market, he said.

Government official Mehmood Aslam said that the bomb was planted near the DVD and mobile shop surrounded by small kiosks selling tea and other edibles.

There was no immediate claim of responsibility.

DVD and CD shops in northwestern Pakistan have been bombed in the past by militants who deem their business "un-Islamic".

Orakzai is one of seven tribal districts on the Afghan-Pakistan border where Taliban and al-Qaida-linked militants have carved out strongholds to plot attacks on Pakistani, Afghan and Western targets.

Islamabad says more than 35,000 people have been killed as a result of terrorism in the country since the 9/11 attacks on the United States.