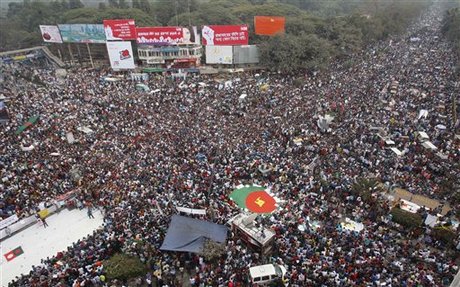 Tens of thousands of people rallied Friday in the capital Dhaka and other cities to demand a ban on Bangladesh's largest Islamic party and the execution of its leaders who are on trial for war crimes.

The protests have been going on since Tuesday when Abdul Quader Molla, a senior figure in the Jamaat-e-Islami party, was sentenced to life imprisonment for mass murder during the 1971 independence war against Pakistan.

But the numbers swelled on Friday, a weekend here, with pro-government supporters saying the sentence from a domestic war crimes tribunal was too lenient and that Molla should have been sent to the gallows.

Eight other leaders of the party are still being tried by the court, which Jamaat and the main opposition Bangladesh Nationalist Party (BNP) say is biased and designed to silence the government's enemies.

"Jamaat and (its student wing) Shibir wing must be banned," said Kamal Lohani, one of the organizers of the protest in Dhaka.

Sirajul Islam, police chief for the Shahbagh region of central Dhaka, told Agence France Presse "more than 100,000 people" had joined the rally in the capital.

Similar protests were held in a dozen other cities, police said.

Molla's sentencing was the second by the tribunal, a domestic set-up which lacks any international oversight and criticized by rights groups and jurists.

Last month it handed down the death penalty to an Islamic TV preacher whose whereabouts are unknown.

The tribunal, which was created by the secular government in 2010, is also trying two senior BNP officials.